A memorial gathering for Joan A. Anderson of Albert Lea will be from 4 to 7 p.m. Friday at Bonnerup Funeral Service in Albert Lea. 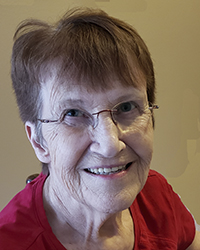 Joan was born April 23, 1941, in St. Peter, the daughter of Earl O. and Mildetta M. (O’Hara) Shogren. She was a graduate of St. Peter High School in 1959. She enrolled in a joint program at Gustavus College in St. Peter and graduated from the University of Minnesota in 1964. She practiced nursing at St. Peter Hospital, was an instructor for nursing at St. Joseph Hospital in St. Paul, taught for five years at Naeve Hospital in Albert Lea and spent 28 years at Austin Community College — now Riverland Community College, teaching in the registered nurse program.

Joan was united in marriage to Theodore “Ted” F. Anderson on Oct. 2, 1965, in St Peter. She was a member of First Lutheran Church in St. Peter and then Albert Lea.

Joan enjoyed reading, gardening, baking, walking, music and dance. Her greatest joy was spending time with her family, especially her five grandchildren. She was a member of the book club at Albert Lea library and volunteered at Sibley Elementary library.

She was preceded in death by her parents; brother, Bob (Karen) Shogren; and mother-in-law and father-in-law Roy (Viola) Anderson.