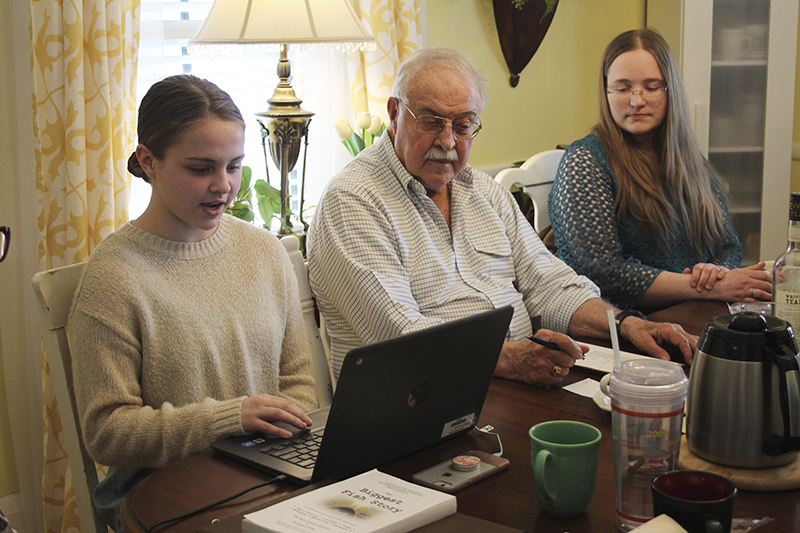 Park Avenue Authors writer Hannah Schommer reads a piece she has been working on to the group during its April meeting. - Sarah Kocher/Albert Lea Tribune

A group of writers put their heads together — and then their writings together — to create a book in time for the Governor’s Fishing Opener.

The Park Avenue Authors, a group of more than 10 Albert Lea writers that meets monthly in Susan Carlson Joyce’s home, had other plans for the opener: namely, a writing contest people could submit their own “fish stories” — exaggerated stories based on real life, like the fisherman whose catch grows by a few inches every time he retells the tale  — and the writing group would judge.

Now, “The Biggest Fish Story” is a book of excerpts or short stories from most of the writers in the Park Avenue Authors. Pieces include everything from newspaper columns, performance scripts, creative nonfiction, historically-based human interest and children’s stories.

In addition to publishing the book in time for the Governor’s Fishing Opener — the first story, written by Steve Carlson, follows a wily worm and a plot that includes the event — the group will also host a May 10 reading at the Albert Lea Art Center.

Several authors will read excerpts or short pieces included in the book and will be there to sign copies.

Troe, who is working on a novel and writes curriculum, joined the group approximately four years ago after reading about the group in the newspaper.

It is common for the group to meet for two to three hours, though Carlson Joyce said they meet until they are done.

“We don’t leave until everybody’s got what they need,” she said.

During group time, they will discuss a technical topic about writing, such as dialogue or pace, fellow writer Meridee Strouf said. She joined the group through conversations with a friend who was involved in the writer’s meetings.

Afterward, the writers will take turns reading something to the group to get feedback on their work. It is not the most comfortable part of the day for Troe or Strouf. A little piece of her goes into everything she writes, Strouf said, but she writes primarily as a means of escape.

But sharing with the group — and having work published in the book — is another step toward being an author, he said, and he knows he needs it. It is an investment in himself, he said.

Over 500 copies of the book will be passed out for attendees of the governor’s fishing opener, and the book will also be available for purchase at the Albert Lea Convention and Visitors Bureau.

Each of the 525 media packets for the governor’s fishing opener will include a copy, and the book will also be available for purchase at the Albert Lea Convention and Visitors Bureau, Executive Director Susie Petersen said.

Strouf said she hopes the book gets more people into writing. For Carlson Joyce, it’s a chance to let people know there is an author’s group in Albert Lea that is contributing to the community.

To Petersen, it is a chance for the community to stand out.

What: “The Biggest Fish Story” book reading and signing

How much: Free to the public. “The Biggest Fish Story” books are available for $6.99 and can be signed by authors at the event.