Mary Ann Nelson died Thursday, April 4, 2019, at Mayo Clinic Health System in Albert Lea. A memorial service will take place at 11:30 a.m. Saturday at First Lutheran Church in Albert Lea. Friends may greet the family from 4 to 6 p.m. Friday at Bonnerup Funeral Service of Albert Lea. The visitation will continue one hour prior to the funeral service at the church. Burial will be at Fort Snelling on April 22. 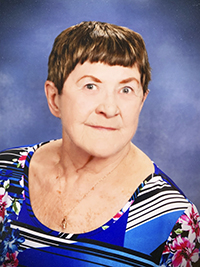 Mary Ann was born May 31, 1936, in Bricelyn to Otis G. and Olive R. (Lura) Johnson. She was baptized, confirmed and attended school in Bricelyn.

She married Art Hedum in 1954 and this union brought five children. The couple later divorced. Mary was a homemaker for her family while they were young.

In 1973, Mary was united in marriage to Vic Nelson. Mary and Vic were the owners of The Elbow Room for 46 years. Mary was instrumental to the success of the restaurant, cooking their famous burgers and daily specials. Mary was an important member of the community and poured her heart and soul into the restaurant by supporting Vic behind the scenes. The Elbow Room was voted the best hamburger in Albert Lea the past 10 years.

Mary was a member of the Elks Club, Does, Moose Lodge, Eagles Club and Veteran of Foreign Wars and American Legion auxiliaries, as well as several committees at First Lutheran Church. She enjoyed serving breakfast and supper to confirmation students. Mary enjoyed playing bingo, selling pull tabs, shopping at Herbergers, and watching her soaps, “Jeopardy” and “Wheel of Fortune.” She also enjoyed girls’ weekends and time spent with family and friends, not to mention she loved an occasional holiday craft.

In lieu of flowers, memorials may be directed to Peace and Power at First Lutheran Church in Albert Lea.

Arrangements are being handled by Brick Meger Funeral Home. To leave a message of condolence, go to www.brick-megerfuneralhome.com.