Mavis Louise (Peterson) Miller went to walk with the Lord on Monday, April 8, 2019. 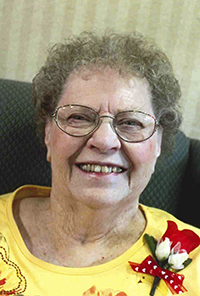 There to greet her were her parents Clifford and Olive Peterson; her father and mother-in-law Ed and Evelyn Miller; husband, Raymond Miller; brother, Clayton Peterson; sister-in-law, Mary Peterson; brothers and sisters-in-law Francis and Elaine Miller and Wayne and Leona Miller; niece, Beth Berhow; and many dear friends and family.

Mavis was born Feb. 18, 1934, to Clifford and Olive Peterson in Albert Lea. When she was 4 years old her family moved to a farm near Hayward, where she attended elementary school and graduated from Albert Lea High School in 1952.

She worked as a bookkeeper at Interstate Power in Albert Lea, Farmers State Bank in Hayward and later in life for 10 years at Norwest Bank — now Wells Fargo Bank — in Austin.

She met her husband, Raymond Miller, on a 4-H hayride in 1951. They married April 18, 1953, at St. Augustine Catholic Church in Austin when Ray was home on furlough during the Korean conflict. Their first year of married life was spent apart while Ray served his country.

Ray and Mavis farmed together near Oakland for over 40 years, raising Guernsey dairy cattle that were often awarded honors at county and state fairs, and selling their milk to Anderson Erickson dairy in Iowa. They were blessed with two daughters. They were 4-H leaders and active in St. Edward’s Catholic Church and the South Central Guernsey Association.

Mavis kept things neat on the farm and white show clothes clean, and often hosted family parties in the farm’s Honey House cottage. They moved into Austin in 1997.

Mavis had been legally blind for the past 30 years, 20 years after being diagnosed with Type I diabetes. But that didn’t stop her from living life to the fullest, making sure everyone she touched felt special, particularly during holidays. She had her daughters’ childhood dolls restored. She was the best “baby rocker.” She still made the best divinity — her husband Ray taught her how — hot chocolate for the snowmobilers and skiers, lemon pie and chocolate chip cookies in spite of her inability to see. Her other senses became her eyes.

She had a beautiful voice, sang in the church choir, loved to dance and the Minnesota Twins — when they were winning.

She took good care of Ray when his health began to fail. She moved into Sacred Heart Assisted Living after Ray passed away and thrived for five and a half years before suffering a stroke last November, when she moved into Sacred Heart Care Center. She was an amazing individual who was deeply loved by many and will be sorely missed. Her dear friend Chuck Keller captured her words of wisdom as follows: “Be kind to one another, keep a smile on your face and always appreciate the good that is done for you.”

A funeral Mass will be celebrated at 10:30 a.m. Saturday at St. Edward’s Catholic Church. The Revs. James Steffes and Dale Tupper will officiate. Friends may call from 6 to 8 p.m. Friday at Mayer Funeral Home and also one hour before the service at the church Saturday. Interment will be in Fairview Cemetery in Oakland.

Per the family’s request, in lieu of flowers, memorials may be made to the donor’s choice in memory of Mavis Miller.