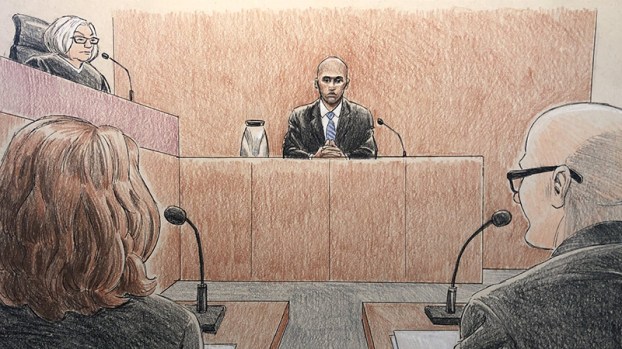 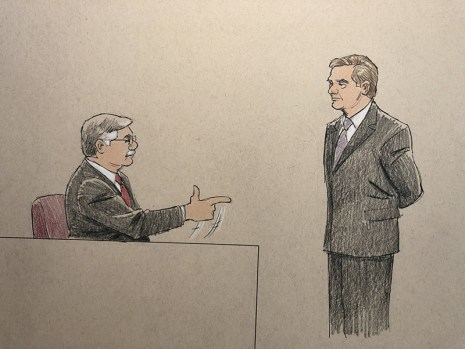 Emanuel Kapelsohn, an expert witness for the defense, demonstrates how quickly a gun could be fired before police could give an order Friday during the trial of Mohammed Noor. - Cedric Hohnstadt/For MPR News 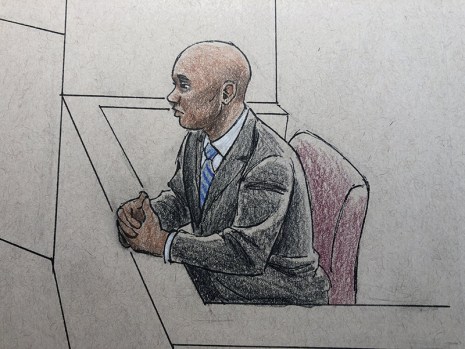 Ex-Minneapolis police officer Mohamed Noor testified Friday that 911 caller Justine Ruszczyk said nothing as she approached his police squad, contradicting testimony by his former partner about what happened in the alley the night Noor shot Ruszczyk.

Officer Matthew Harrity, who sat in the driver’s seat as Ruszczyk approached the squad from the back, testified earlier that he’d heard the woman “murmur” or make some kind of sound as she came up on the squad.

Noor’s remarks came on a day when his defense attorney described a reconstruction they’d staged months earlier — complete with a replica gun and an actress in a pink shirt marked with an X — to demonstrate how Noor turned and shot Ruszczyk that night.

The defense also put a use-of-force expert on the stand who called Noor’s decision to fire reasonable.

Closing arguments in the trial are set to begin Monday. Jurors are expected to be sequestered afterward until they reach a verdict.

Noor is charged with second- and third-degree murder and second-degree manslaughter in the killing of Ruszczyk, also known as Justine Damond, in July 2017.

She had called 911 to report what she thought was an assault happening behind her home. Noor, one of the responding police officers, shot Ruszczyk through the open driver’s side window of the squad as she approached.

Noor’s defense attorneys have argued he fired to protect his terrified partner after hearing a thump on the squad and then seeing a figure by the driver’s side window raising an arm.

Prosecutors, who’ve rested their case, said the thump was a story made up later and that Ruszczyk, approaching the squad in her pajamas, could not have been considered a threat.

During testimony Thursday and Friday, Noor said repeatedly he had to make a “split-second” decision to fire that night, perceiving a threat to him and to Harrity.

Noor told jurors Thursday that he and Harrity, sitting in the squad in the alley, were about to clear the call about a woman being attacked and move on when they heard a bang.

After the noise, he said he saw Harrity, who was in the driver’s seat, reach for his weapon, that Harrity struggled to get the weapon out and had fear in his eyes. Noor said he saw a blonde woman in a pink shirt raise her arm, and heard Harrity exclaim, “Oh, Jesus” before firing.

Noor’s also acknowledged on the stand that he did not see Ruszczyk’s hands before he shot.

On Friday, he admitted to prosecutor Amy Sweasy that Ruszczyk had to be past Harrity in the driver’s side window in order for Noor to see her right arm raise, as he has testified.

As he finished his testimony Friday, defense attorney Thomas Plunkett asked Noor what would have happened if Ruszczyk had a gun in her hand when raising her arm. “My partner would have been killed,” he replied.

Two police use-of-force experts testified for the prosecution Wednesday, slamming Noor for firing in that situation. One said that “no reasonable police officer” would have perceived Ruszczyk as a threat that night, and that being startled doesn’t justify deadly force.

The defense on Friday countered with its own expert saying that Noor’s move to shoot was “objectively reasonable” under the circumstances.

“If it appears as a deadly threat, the officer is trained to treat it like a deadly threat,” Emanuel Kapelsohn told the court, adding that it’s not practical for an officer to try to give commands or drive away in that situation. “The words can’t come out of the officer’s mouth before they get shot,” he said.

Kapelsohn testified that in December the defense attempted to reconstruct the scene on its own. Kapelsohn said Noor sat in the passenger’s seat of the vehicle holding a replica gun with a laser attached.

A woman about Ruszczyk’s height was outside the vehicle in a pink shirt with an X taped on her abdomen at the location Ruszczyk was wounded.

Kapelsohn said he told Noor to point the laser at the X in order to show that Noor’s story about what happened “was possible.”

Kapelsohn said he played the role of Harrity, Noor’s partner, in the driver’s seat. The defense also rented the same model SUV as the squad and went to the scene to take measurements, although Kapelsohn admitted that it was a different size than the police vehicle.