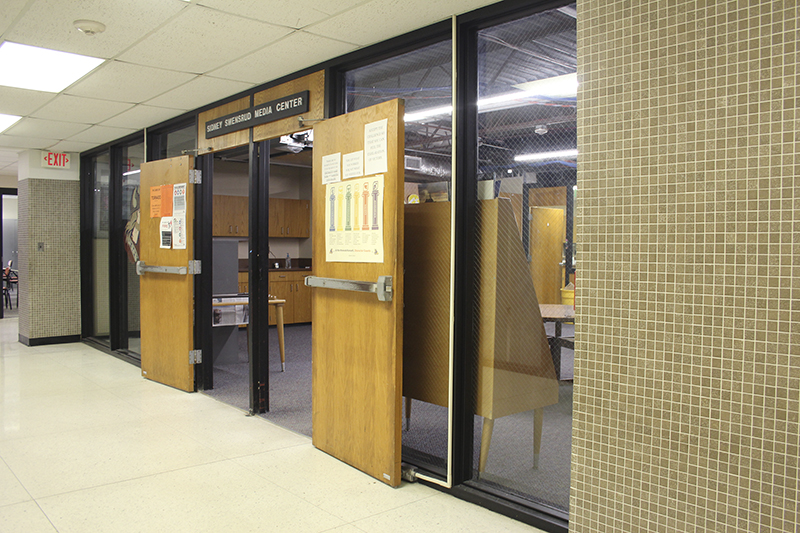 The Northwood-Kensett Sidney Swensrud Media Center is getting a makeover this summer, including a small expansion into the current Iowa Communications Network room across the hall. The media center is intended to become a flexible learning space, Superintendent Michael Crozier said. - Sarah Kocher/Albert Lea Tribune

NORTHWOOD — Work on the Northwood-Kensett secondary school media center this summer is planned to help students better do work of their own starting next school year.

In a move intended to increase the area’s usability, the Sidney Swensrud Media Center and a facing room will be renovated over the summer, Northwood-Kensett Superintendent Michael Crozier said.

“You step into that and you can tell it’s not as up to date as the rest of this building,” Crozier said of the media center.

The renovation follows last summer’s work at the school, which involved updating the junior-senior high school’s HVAC system and replacing its industrial technology and agriculture class standalone building with an expansion intended to house those workspaces.

“This year may be more of a traditional or typical time frame,” Fritz said.

According to Crozier, the project is expected to come in under $500,000. Kenison Construction out of Northwood won the $387,000 bid out of six submitted. Crozier said he expects the furnishings to run between $36,000 and $38,000. The board also approved a $27,200 contract with Atura Architecture for the remodel.

Funds for the remodel come from SAVE — a tax for school infrastructure use — the Physical Plant and Equipment (PPEL) levy and Worth County Development Authority money.

Changes to the media center are based on some past use of the space, but also of emerging student use, Fritz said. He said educators are leaning into the real-world benefit students receive when working collaboratively on assignments.

“The idea of this whole space is to make it flexible learning space,” Crozier said.

Additionally, the room could be a good meeting space for staff and community groups if it were reconfigured. The current setup is not adequate for that, Fritz said.

The north end of the library, currently housing bookshelves, will become four study spaces with an Apple TV on the wall above for students to share their computer screens, Crozier said. Book shelving will be placed along the walls lining the room.

All the furniture will be mobile, Crozier said. The tables will have wheels on one side and can be configured into rows or circles.

The staff offices on the west end of the library will be moved to what is now the Iowa Communications Network room south of the media center, a room Crozier said was not being utilized and, with advances in technology, is no longer needed for teleconferencing.

Ahead of the offices — whose full media center-shared wall will become a dry erase board, Crozier said — is a space that can be divided into up to three rooms using partitions. The circulation desk will be along the media center’s west wall, but it will be also be mobile.

Part of the project also includes two new restrooms added to the north end of the media center. The media center will have four skylights put in and LED lights. The project will also finish the ceiling left off from the HVAC remodel. Crozier said they intentionally left the ceiling exposed to save money, rather than putting it in and removing it again.

Rooms used as a storage room and workroom for students will stay.

“We’re wanting kids to collaborate more and more with each other,” Crozier said, and he said students at the school are looking for that collaborative space.

According to Fritz, the room’s plans have established a way to maintain support for needs of groups large and small for during and after school.

“Time will tell, but I really am excited about the plans,” he said.

The superintendent said he had “no doubt” the project will be complete by Northwood-Kensett Junior-Senior High School’s Aug. 23 start date.

The Sidney Swensrud Media Center will not have its name changed, Crozier said.