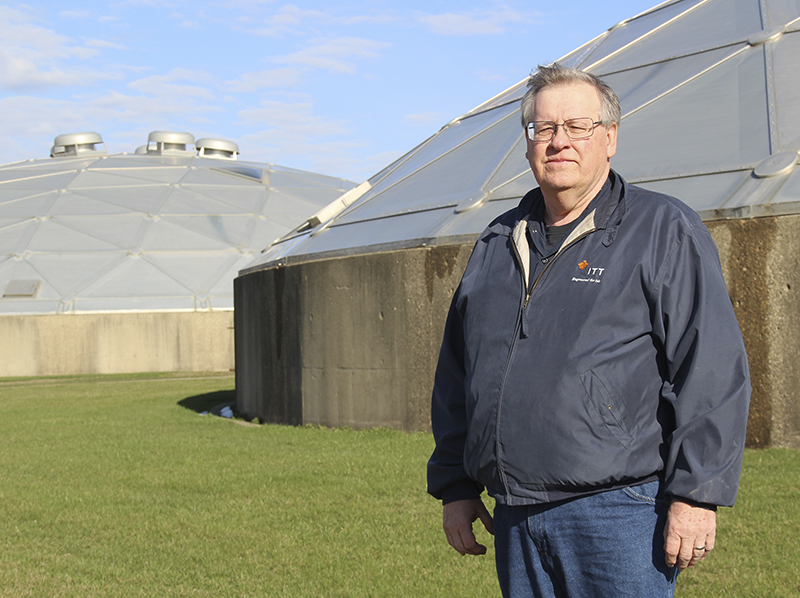 Rick Ashling has worked as the superintendent of Albert Lea’s wastewater treatment plant for 26 years. He is pictured in front of two clarifiers at the treatment plant Monday. - Sarah Stultz/Albert Lea Tribune

For the past 26 years, Albert Lean Rick Ashling has led the operations of a tucked away, yet essential part of the city’s operations.

As the Albert Lea wastewater treatment plant superintendent since January 1994, Ashling oversees eight other employees who treat the city’s wastewater before it can be discharged into the Shell Rock River. They also test the city’s drinking water for bacteria.

Ashling said he got into the field after returning home from the Vietnam War. He didn’t have a job, and his father showed him an American Legion paper that showed how with the approval of the Clean Water Act — which gave the Environmental Protection Agency the authority to implement pollution control programs, including wastewater standards — there was a need for 5,000 wastewater treatment plant operators.

He said that Thursday he called the EPA, and then on Monday he started at Kirkwood Community College in Cedar Rapids, Iowa, to get the necessary certification for the job.

“It sounded interesting, and I was out of a job,” Ashling said. “I didn’t know what it was, but I just dove in and I haven’t looked back.”

After college, he worked for the city of Moorhead for four years and then Westerville, Iowa, for 18 years, after which he was recruited to come and work for Albert Lea’s wastewater treatment plant. In total, he has supervised people for 43 years in the field.

Ashling, who has always had an interest in outdoor activities such as hunting and fishing, said he has a particular interest in protecting the environment.

This goes hand in hand with his job, which he describes as a public health issue, because of how critical it is that there is adequate sewage handling.

Ashling referred to a statement put out by the Centers for Disease Control and Prevention that wastewater treatment has done more for people than any penicillin or antibiotics invented since the 1850s.

“Wastewater operators save more lives than doctors in any given day,” he said.

Despite how important the job is, Ashling pointed out it is a job that is not often discussed and doesn’t get much publicity. Because of that, people sometimes complain about the cost of treating sewage.

He compared it to other actions such as washing dishes, taking a shower or turning on the lights.

He said there used to be a lot of elementary and junior high tours at the facility and thinks the younger generation and even many other community members need to be educated on what wastewater treatment is and why it is needed.

In recent months, there has been discussion about proposed upgrades at the city’s wastewater treatment plant based on proposed phosphorous limits set by the Minnesota Pollution Control Agency.

In addition to his duties with Albert Lea, Ashling is contracted with the city of Emmons for its wastewater treatment.

The city will also consider at an upcoming City Council meeting whether to oversee the treatment plant at Myre-Big Island State Park.

Aside from his duties at the wastewater treatment plant, Ashling volunteers to help record the Albert Lea City Council meetings with Public Information Coordinator Teresa Kauffmann.

Family: wife, Bonnie; son, Jay, who passed away 13 years ago; and daughter, Jana, and her fiance, Brian Livingston

Interesting fact: when Ashling’s daughter was working toward getting her master’s degree from New Mexico State University, he would go down and help her with her thesis, which was on the translocation of mule deer and habitat selection in Silver City, New Mexico. She now works for the Idaho Fish & Game Department