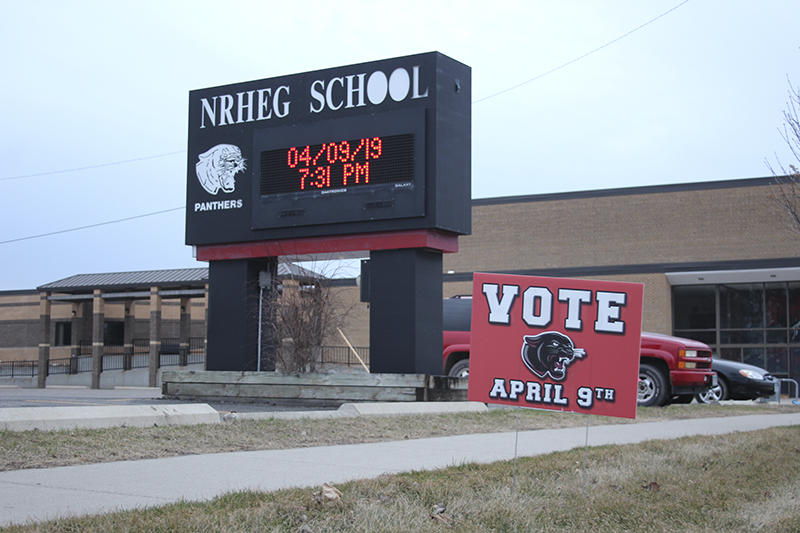 Voters passed a $9.1 million referendum Tuesday that will allow NRHEG to move forward with improvements to both school buildings. - Sarah Kocher/Albert Lea Tribune

NEW RICHLAND — A 62% yes vote in Tuesday night’s special election will carry the NRHEG school district forward on projects it has asked voters to fund before without success.

NRHEG school board chairman Rick Schultz said he was thrilled with the outcome and appreciated support from taxpayers.

“I think it’s great that they stepped up to the plate,” Schultz said.

He said the board would work to ensure residents receive value for their tax dollars.

Overall, 1,116 voters turned out to the two polling locations: the elementary school in Ellendale and the secondary school in New Richland; 696 voted yes, while 420 voted no. Of those voting at the Ellendale location — residents of Steele County, Geneva, Bath, Geneva Township and Freeborn Township — 56% voted yes and 44% voted no. Of those voting in New Richland — residents of Waseca County, Hartland and Hartland Township — 68% voted yes and 32% voted no.

“I’m obviously quite pleased,” NRHEG agriculture teacher Dan Sorum said after the vote. “We’re looking at a lot of very positive changes that are going to be made now.”

For Sorum, this means a future in which all its materials workers do not share the shop space: woods, metals, welding, the works in one place.

“It was obsolete the day it was built,” Sorum said of the shared room.

Sorum said he sees the yes vote as a focus on science and career and technical education, which does not always receive that focus.

“It’s nice to see that the community supports those areas,” Sorum said.

New Richland residents Bonnie and Joe Isder both said they voted in favor of the referendum.

“I’m all about anything for the school and will support it in any way that I can,” Bonnie Isder said.

She feels both schools need updates and improvements, she said.

With the pair Tuesday night was their 2-1/2-year-old, who walked out with an “I voted” sticker that matched theirs.

“He will probably be going to school here,” Bonnie Isder said.

Bonnie Isder said she was not concerned about her taxes going up, and that she voted in favor of the 2015 referendum as well.

The successful $9.1 million referendum follows a failed referendum asking taxpayers for over $14 million in 2015. Following a community survey, the largest change made between the two was removing the proposal of a new gymnasium, which 2016 community survey results indicated was one reason — in addition to the tax impact — why voters turned down the proposal in 2015.

The tax impact was the deciding factor for New Richland resident Mike Prange, who said he voted no Tuesday night.

Schultz was a member of the school board during the 2015 referendum.

“We were hopeful that we had done a better job of listening” ahead of this election, Schultz said.

The district administered a community survey in the fall regarding how much taxpayers were willing to pay and which projects had the most public support. Prior to the survey, a task force was formed to consider what the school needed and community was willing to support. Sorum was a member of that task force.

For Hartland residents Barb and Jerome Ahles, rising taxes were not a deterring factor in their vote. Both voted yes Tuesday night.

Their children attended and their grandchildren currently attend school in the NRHEG district — but even if they did not, Jerome Ahles said, he would still vote in favor of the referendum. He said he sees the need to upgrade the buildings.

“We’re glad they’re trying to improve the school,” he said.

Taxes can go up, they said.

NRHEG Superintendent Dale Carlson said the timeline for the project has not been established, but the broad goal is a late spring or summer start in 2020. He thanked the community for voting and residents for supporting the district.