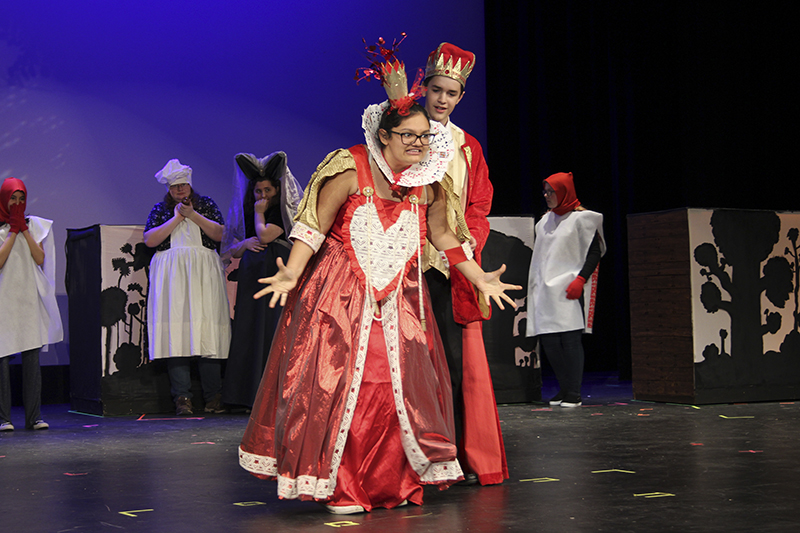 “Off with their heads!” the Queen of Hearts (freshman Elizabeth Romano) demands. The play was added following student demand for a spring show. Sarah kocher/Albert Lea Tribune 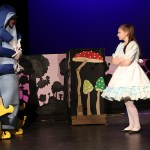 Alice (junior Halle Schrader) grows frustrated with the caterpillar (Perrin Finn) as she works through confusion with her strange experience in Wonderland. 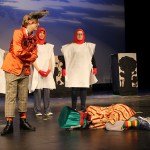 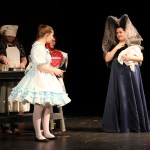 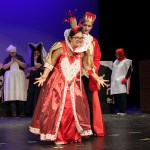 “Off with their heads!” the Queen of Hearts (freshman Elizabeth Romano) demands. The play was added following student demand for a spring show. Sarah kocher/Albert Lea Tribune

WELLS — For student performers, learning lines is often a challenge. But this time, United South Central High School students have it a little harder because their lines do not make sense.

They are not supposed to.

“It’s been kind of difficult to learn lines and stuff because it’s just kind of so crazy and random — everything,” junior Halle Schrader said. “Like, we’ll be talking about having tea and then all of a sudden, ‘Riddles!’”

Approximately 40 students will perform “Alice in Wonderland” April 13 and 14. The show is a different version than those popularized by several movies, with many recognizable characters but a few new vignettes and modified plot points. After all, director Kirstyn Wegner said, it would be difficult for technical director Ben Dundas to shrink and grow Schrader, who plays Alice.

Nonetheless, the show involves more technical work than any show the school has put on in the past, Dundas said.

“This show is far different than anything I’ve ever seen on a high school stage,” he said.

There are almost 10 times the lighting cues than a typical production. Where a past show may have had 10 or 15 cues, this show has close to 100.

Many of those ideas came to Dundas in January, he said. He pitched the concepts to Wegner.

“When he showed me his idea, I was just like, ‘That is amazing,” Wegner said. “‘Do you think we can pull it off?’ And he said, ‘Yes, I think we have the kids to do this.’ Because it would take the right group of kids to build that and then to operate it because it’s really technically difficult. And he thought we did, so I said, ‘Go for it.’”

Both Dundas and Wegner said they knew they had the caliber of students needed to do the work.

“With the students we have in this program, there’s no way we can’t do some of this stuff,” Dundas said.

He oversaw student construction of the lighting rigs and set construction. Between, sound, lights, cast and audience interaction, “I feel like we hit this thing out of the park with all the elements coming together on it,” he said.

That audience interaction is more pronounced than in past shows she has done, Schrader said. At different points in the production, there will be lights, sound and characters all over the auditorium.

“The show is all about how the audience sees the show and if we can make the audience part of the show, then they got their money’s worth,” Dundas said.

Eighth-grader Aislynn Schlosser said while the role itself never tires her, the running does. Schlosser plays the Mad Hatter. It is a familiar role, she said.

“I absolutely loved watching the Disney classic as a child,” she said.

She also discovered and enjoyed the first Tim Burton remake, from which she pulled her characterization of the Mad Hatter as inspired by Johnny Depp. She has also read Lewis Carroll’s “Into the Looking Glass.”

And while it can be crazy, it is also intended to be very entertaining, freshman Elizabeth Romano said.

“You never know what the next line is going to be,” she said.

Romano, who plays the Queen of Hearts, said the show is a comedy and adventure story.

“Every scene, you’ll find something to laugh at,” she said.

For the production, Romano wears a stiff collar constructed of playing cards and decorated subtly with rhinestones. Her natural hair will be used for the queen’s heart-shaped updo.

While the caterpillar and Humpty Dumpty costumes were purchased, the rest were made, including a bevy of playing cards as well as Tweedledee and Tweedledum (featuring tubing material).

“The costumers have really done an outstanding job,” Wegner said. “I’ve been so blown away by their dedication.”

None of it was supposed to happen.

“This show only existed because the kids put around a petition to bring back the spring show because they had such a good time in (the fall play),” Wegner said.

“Alice in Wonderland” was not on the school calendar when the year started. Wegner took over from father Clay Miller when he retired in 2017 after 33 years leading USC drama. Almost 40 students signed the petition they took to the athletic/activities director, Wegner said. In doing so, they helped her choose the show. Her father made a point not to cut students, she said, and she is trying to continue that on.

“I should probably pick a show with a big cast,” Wegner said she thought.

It is also a cast with many different abilities and acting styles, Wegner said.

Schlosser said she hopes the audience has a night of wow moments — “a rush of absolute, ‘Wow, that was fun,’ or, ‘Wow, that was cool,’” she said. “Something that’s just — it either leaves your heart pounding or it leaves you going, ‘That made no sense, but I loved it anyway.’”