Born Nov. 17, 1929, in Morris to Stanley “Tiny” and Ethel Johnson, Shirley Kindem was the valedictorian of Morris High School’s class of 1947. She enrolled at St. Olaf College in Northfield where she completed a double major in art and music and sang with the St. Olaf choir. A member of Phi Beta Kappa, she graduated magna cum laude in 1951. After a two-year stint teaching in Hardin, Montana, she married St. Olaf classmate and now Luther Seminarian, Roald A. Kindem, June 8, 1953, and they moved to Kalispell, Montana, for Roald’s internship year. The following May they welcomed the first of eight children into their lives: Randi, Peter, Erik, Kari, Kristofer, Mark, Mikal and Joel. 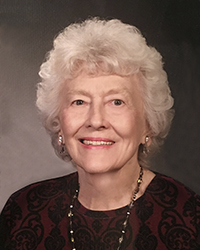 Following Roald’s graduation from Luther Seminary and ordination in 1955, he and Shirley served Calls at First American (later Christ) in Whitefish, Montana, from 1955-57; First Lutheran in Havre, Montana, from 1957-66; Grace Lutheran in Albert Lea from 1966-73; and California Lutheran University, Thousand Oaks, from 1973-78 before making Apple Valley their home from 1978-2019, where Roald served the church in a variety of capacities.

As the “CEO” of Kindem Home Enterprises, Shirley ruled over her brood with a firm and loving hand, cooking delicious homemade meals three times a day for decades, distributing home baked treats to friends and neighbors far and wide, sewing clothes, giving buzz cuts, managing internecine feuds, teaching her children piano and dispensing discipline when needed. The first to rise at morning and the last to retire at night, Shirley was ceaselessly in motion, attending to the needs of those around her. Perpetually active as a choir director, artist, writer, singer, retreat leader and volunteer in the congregations served by Roald and in the schools her children attended, Shirley’s mind and hands were never idle.

In the fall of 1979, as she approached 50 and the Kindem nest grew empty, Shirley enrolled at Luther Northwestern Theological Seminary in St. Paul, fulfilling a desire for advanced theological education and the opportunity to serve the church in a new capacity. Majoring in systematic theology while purposefully broadening her education beyond what the seminary required through internship and CPE experiences, she was awarded a well-earned Master of Arts degree in May 29, 1983. Subsequent calls served include the National American Lutheran Church Women’s National Leadership Training Council in 1986, serving on the staff of Hosanna Lutheran Church in Lakeville from 1986-88, serving on the staff of St. John Lutheran Church in Rosemount from 1989-94, serving as a volunteer chaplain at Fairview Ridges Hospital in Burnsville, as well as serving as an elected member of St. Paul Area Synod Council and Synod Candidacy Committee.

Alongside her volunteer and professional work within the church through the years, Shirley expressed her creativity in other outlets as well, including community theater and as a member of Ventura County California Master Chorale, Macalester Community Chorale and Grace Lutheran Church Choir, among others. After she retired from professional church work she found herself exploring a new passion — researching and writing detailed histories of both her mother’s and father’s families, as well as a three-volume memoir tracing her life story, entitled “Growing Up Shirley.” Her artistry also found expression in the unique, heirloom quilts she created for each of the married couples in her growing extended family and in matching baby quilts that welcomed each grandchild home, in the dozens of afghans she crocheted for children and grandchildren heading off to college, in the fashionable American Girl doll clothes she created especially for her daughters and granddaughters, and in the over 1,000 baby kits she crocheted for newborns. Each and every project she undertook bore Shirley’s landmark sense of style and excellence and extended as well to her considerable skills as a cook and baker who, especially on holidays, made each occasion special.

Shirley is survived by her husband of 65 years, Roald; her children and their families Randi (Albert) Siu of Carlisle, Massachusetts, Peter (Gabrielle) Dion-Kindem of Agoura Hills, California, Erik (Christine) Kindem of Seattle, Kari (Thomas) of San Jose, California, Kristofer Kindem of Eagan, Mark (Miriam) Kindem of Bemidji, Mikal (the late Diane) Kindem of Blaine and Joel (Susan) Kindem of San Diego; 19 grandchildren; one great-grandchild; one sister; numerous nieces and nephews; many brothers and sisters in Christ; and cherished friends and neighbors.

“Shirley’s spirit lives on in all of our hearts as a life-long example of deep Christian faith, generosity, kindness, perseverance, patience and devoted service to others,” her family said.

“Lord now you let your servant go in peace, according to your word. For my own eyes have seen your salvation which you have prepared in the sight of every people. A light to reveal you to the nations, and the glory of your people Israel.” Luke 2:29-32