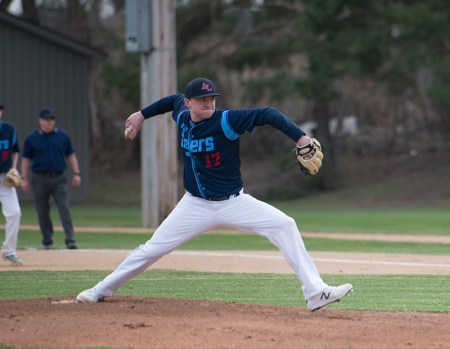 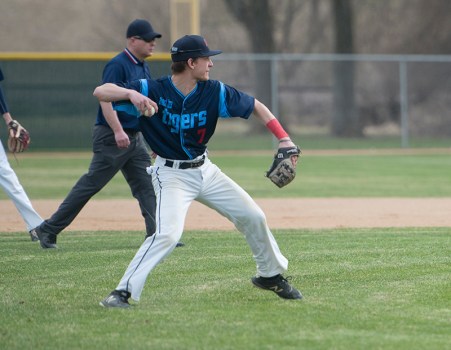 Albert Lea senior Carter Simon makes the throw to first Tuesday afternoon against Austin. The Tigers won the game to move to 2-1 on the season and 1-0 in the Big Nine. - Tyler Julson/Albert Lea Tribune 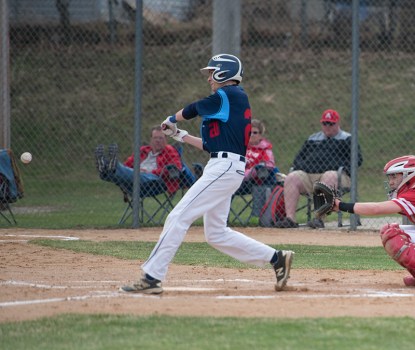 Albert Lea senior Dalton Larson picks up the first hit of the game for the Tigers. Larson would come around to score later in the inning. - Tyler Julson/Albert Lea Tribune 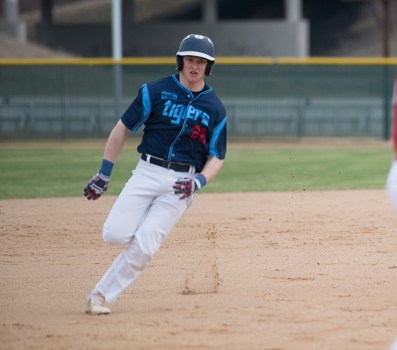 Albert Lea senior Ian Ball rounds third Tuesday night against Austin. He would be called safe at home plate to narrow the Austin lead to 4-3 in the third inning. - Tyler Julson/Albert Lea Tribune

The Albert Lea baseball team opened up Big Nine Conference play in the first game of a doubleheader against Austin Tuesday afternoon.

Despite falling into a quick 4-0 hole, the Tigers battled back to take a fourth-inning lead and pulled away to down the Packers 8-4.

Austin got the scoring started right away in the first inning with a ground out that scored one run. It seemed as though Albert Lea was in for a long night when the top of the order struck out to end the inning.

The Packers added three more runs in the second to take a 4-0 lead. The runs came courtesy of two singles, a double and a triple with only one out. A pop fly and ground out ended the inning before the lead could be widened.

Again, it was three up-three down for the Tigers in the bottom of the second inning. However, the defense found its footing in the top of the third when a strikeout and double play ball quickly ended the inning.

The bats woke up for Albert Lea in the bottom of the third, with two singles, two walks and an error giving the team new life. Senior Dalton Larson led off the inning with a single and was then bunted to second by senior Isaac Moyer. Senior Carson Goodell advanced him to third on a grounder and was scored when an errant ball went by the catcher.

Seniors Parker Andersen and Ian Ball were walked back-to-back and scored on an RBI single by senior Carter Simon and a throwing error at first. The three runs cut the Austin lead to 4-3 heading into the fourth inning.

Another solid defensive inning sent a surge of momentum through the Tigers dugout as they took the lead in the bottom of the fourth. Junior Koby Hendrickson opened the inning with a single followed by a walk from Goodell two batters later. Andersen hit a big shot to bring both runners in, putting him at second base. Andersen remained stranded at second, however, when a groundout ended the inning.

The Tigers found a one-two-three defensive outing in both the fifth and sixth innings and all but sealed the victory in the bottom of the sixth, adding on three more runs.

Larson reached on an error and was advanced on a walk by Moyer. Both runners moved up when Goodell hit a successful bunt to advance them. Andersen walked to load the bases and senior Ian Ball reached first on an error to score one run. Simon stepped up and clinched the win with a two-RBI double to give the Tigers a 8-4 lead with just three outs remaining for the Packers.

A Packers single led off the inning, but three quick outs including a remarkable diving catch by sophomore Jack Jellinger gave Albert Lea the four-run win.

Andersen started on the mound for the Tigers and pitched all seven innings. He allowed four runs on seven hits while walking three and striking out four.