Wells artist will return to teach classes for local celebration 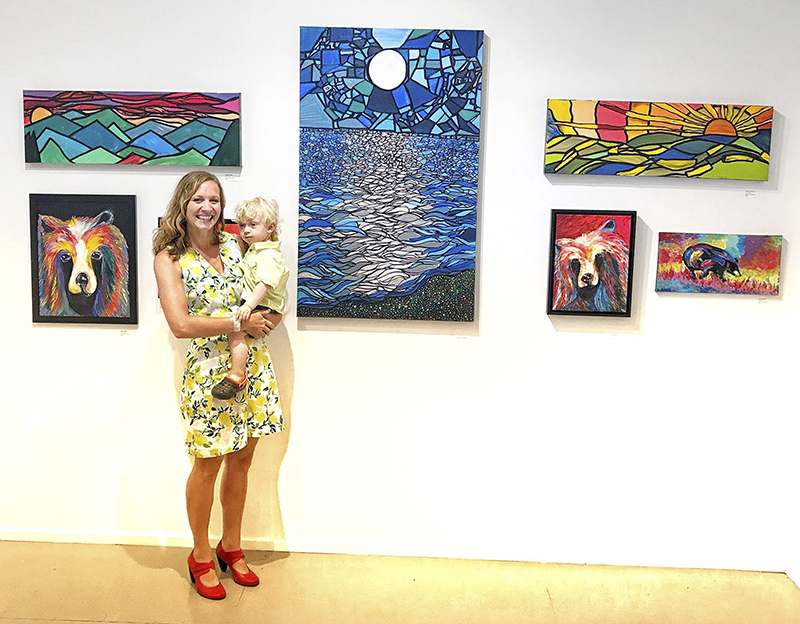 Painter Christina Wilson, who grew up in Wells, stands with her son Jonah by a display of her work at the Fireweed Gallery in Homer, Alaska, in August. Provided

A Wells native will briefly return to do in her hometown what she now does in Alaska: teach art.

Christina Wilson, who lives in Anchorage, Alaska, and works as a professor of studio arts at Alaska Pacific University-Anchorage and teaches art classes twice a week at local restaurants, grew up in Wells and took her first painting class as a high school senior.

“I’d love to come back and kind of share that love with others,” Wilson said.

While Wilson is in Wells, she will teach three classes as part of the year-long sesquicentennial celebration.

“She has a very faithful following,” organizer Lea Nowak said. “The classes always fill up.”

“She continues to come back and teach and she has some great relationships with those people who come again and again to her classes,” Nowak said.

One class on April 26 will teach attendees to create a canvas painting of Alaska birches. At one of her two classes on April 27, students will learn to paint peonies on two wine glasses. Her second class that day will involve painting on a birchwood canvas.

“I just love that people can bond and create something beautiful for themselves or for their home, too,” Wilson said. 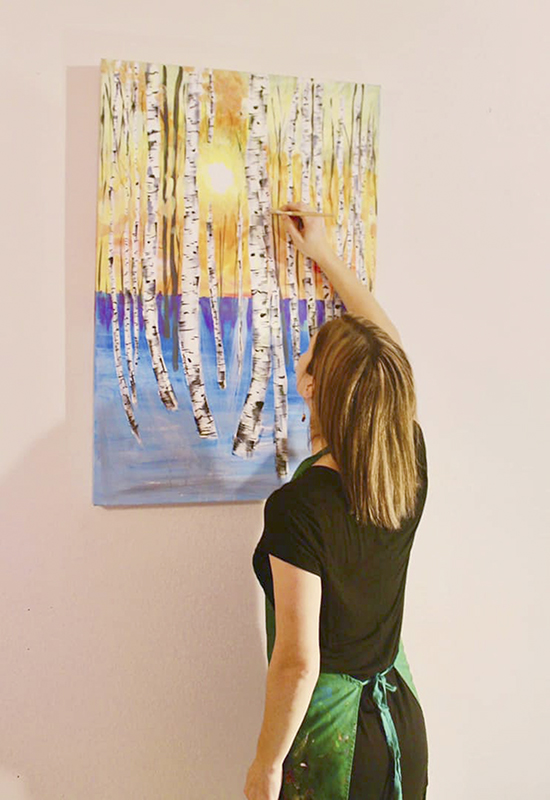 The classes will be the same format as those she teaches in Anchorage. She provides supplies, and those who attend will walk away with a finished piece, Wilson said. She walks painters through step by step.

“I teach art because I think everyone is an artist,” Wilson said. “Everyone has creativity inside of them and different ways to express themselves.”

This summer, Wilson will complete an art residency in Sweden, where she hopes to finish her second children’s book. A lot of the money she earns from classes she will teach in Wells will go toward funding that trip, she said. Her first book, “Peek-a-boo Bear,” will be followed by her upcoming “Goodnight Musk Ox.”

In addition to teaching classes, five pieces of Wilson’s work will be on display as part of the 150th anniversary celebration alongside work from other regional artists. The pieces will come from her family’s private collection, many of which include Alaska birch tree paintings. She will also be at the exhibitors’ reception April 26.

Wilson dove into painting in college, she said, after which she joined the Peace Corps in Mali, West Africa. During her time there, she received a grant through the Peace Corps to paint educational murals at local hospitals and schools. She had steady help from five students. Wilson said she does consider these to be her first classes.

Now, in addition to teaching, Wilson also works as a licensed counselor and uses expressive arts therapy. During art therapy, Wilson said, it is about the journey.

“It’s not about the art that you created,” Wilson said. “It’s kind of about the process of creation.”

Last year, Wilson led a group at her local university where students would come after class and paint — in the dark.

They would also paint using nontraditional items: paperclips, coins, pipe cleaners or just their fingers, Wilson said, “just to get our heads outside of the judgement we might have about art or ourselves creating art.”

Through her time and experiences as an artist, her work has changed. She remembered studying the masters in college and wondering how they could change their style so much. She has a taste of that.

“Different cultures and countries and people … they change your art,” she said.

When Wilson would paint soon after moving to Alaska, she was drawn toward birch trees. Then, she moved toward mountainscape and local animals as her paintings became more refined, she said.

But Wilson is drawn to nature and color, describing her style as vivid and vibrant. She uses her art to capture and portray something as perhaps even more vividly than the eye sees it in real life, she said.

Now, her work is in a more abstract phase in which she tries to emulate stained glass and focuses on fragmentation.

“So I’ll paint a mountain scape, but I’ll kind of fragment it like a puzzle piece,” she said. “… Who knows where the art will move next?”

What: art classes and art expo

How much: all classes are $35. Those who wish to register can do so at christinawilsonart.com. The art expo’s exhibitors’ reception is $5