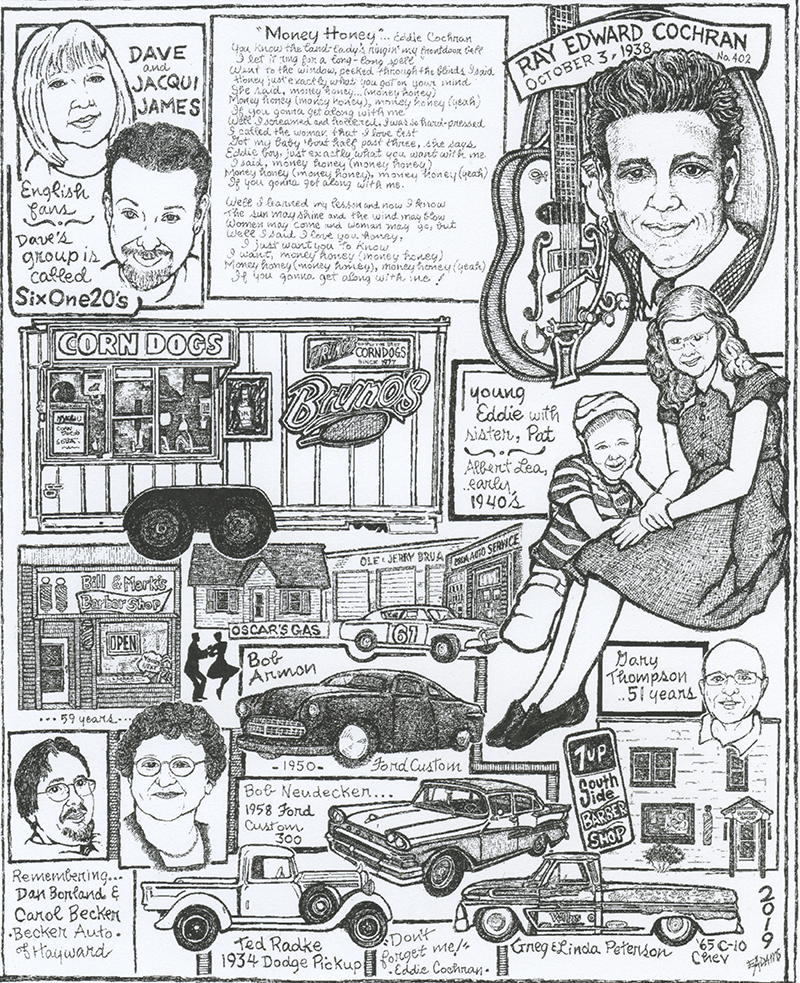 The Freeborn County Historical Society has announced the creation of the 26th Eddie Cochran print by artist Eloise Adams, according to a press release.

Pictured in the upper left section of the newsprint are the special guests for this year’s event, Dave and Jacqui James from England. They are devoted Cochran fans. Dave James is a musician whose group is called Six One 20s.

Pictured in the center of the top section are the lyrics to one of Cochran’s songs called “Money Honey.” To the right is Ray Edward Cochran, born Oct. 3, 1938, in Albert Lea, with his Gretch guitar. Below is a young Cochran with his sister, Pat, when they lived in Albert Lea in the early 1940s. Cochran’s sister will also be in Albert Lea for this year’s Cochran celebration, the press release states.

In the lower lefthand corner of the print, Dan Borland is remembered. Borland was a devoted recorder of all Albert Lea events. Also remembered is Carol Becker of Becker Auto of Hayward. She was active in Hayward and started the Hayward Car Show.

Four classic automobiles that will be at the car show in Albert Lea are also depicted — a 1950 Ford Custom owned by Bob Armon, a 1958 Ford Custom 300 owned by Bob Neudecker, a 1934 Dodge pickup owned by Ted Radke and a 1965 C-10 Chevrolet owned by Greg and Linda Peterson.

The prints will be available to be seen or purchased at Adam’s Originals in downtown Albert Lea, according to the release.