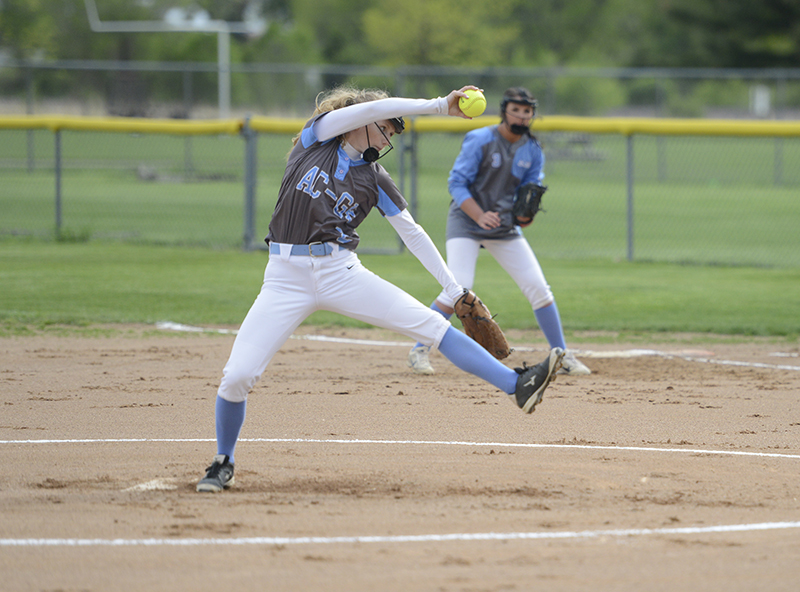 Alden-Conger/Glenville-Emmons senior Erika Bute throws in a pitch during the first inning of Monday night's Section 1A playoff game against Lyle-Pacelli. The Wolverines lost the game 18-8 after five innings of play. - Tyler Julson/Albert Lea Tribune

The Alden-Conger/Glenville Emmons softball team opened postseason play Monday night, hosting Lyle-Pacelli in the first round of the Section 1A playoffs.

After splitting their two regular season meetings, the Wolverines struggled to put runs on the board early in the game against the Athletics. However, the biggest factor in the game was the number of errors committed by the Wolverines in the 18-8 five-inning loss.

The Athletics started the game with a bang smashing a lead-off triple that hit the outfield fence. A bunt, walk, sacrifice fly, single and an errors led to the Athletics scoring three runs in the top of the first. 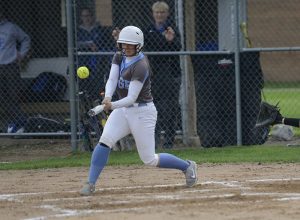 The Wolverines put one runner aboard in the first in senior Erika Bute, who hit a two-out single. However, a popout left Bute stranded and ended the inning, 3-0.

The Wolverines minimized damage in the second inning by only allowing one run. However, another two errors were committed in the inning that allowed that run to score.

In the bottom of the second inning, the Wolverines got on the board with a run started by back-to-back singles by junior Chloe Anderson and sophomore Grace Erickson. Junior Kennedy Severtson advanced both on a sacrifice bunt. With two runners in scoring position, catastrophe was avoided when the Athletics committed a throwing error that got Anderson out of a pickle and across home plate.

Sophomore Abbie Theusch hit a triple in the next at bat to score Erickson before the inning ended.

Another error in the top of the third that would have ended the inning led to two more runs scoring  for Lyle-Pacelli, and a one-two-three inning by Alden-Conger/Glenville Emmons shifted the momentum in favor of Lyle-Pacelli.

The Athletics tore the game open in the fourth, scoring 12 runs. The Wolverines battled a little closer in the bottom of the inning, scoring four runs thanks to an error and a three-RBI double by freshman Mallory Ingnaszewski. However, they would fall short of the amount needed to extend the game.

The Wolverines end their season with an 8-11 record and first round exit in the 1A Section playoffs.