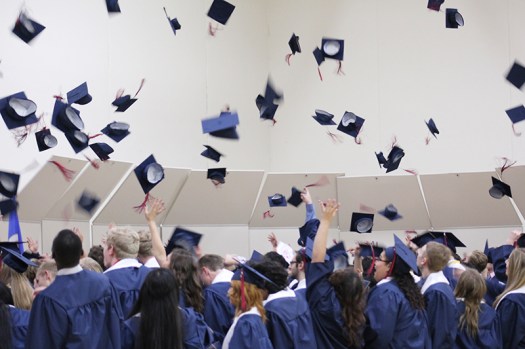 The class of 2019 celebrates their graduation at the end of the commencement ceremony for Albert Lea High School. Sarah Kocher/Albert Lea Tribune 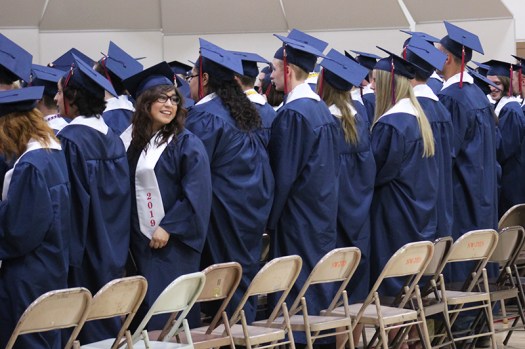 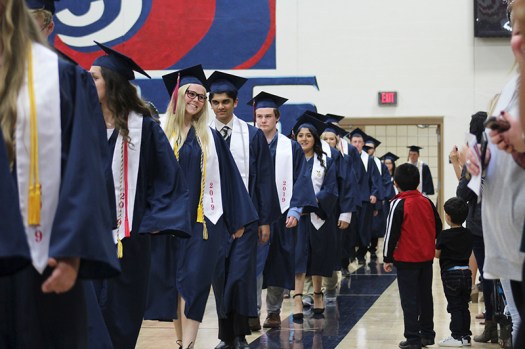 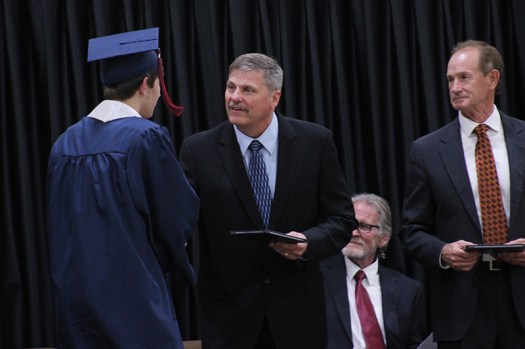 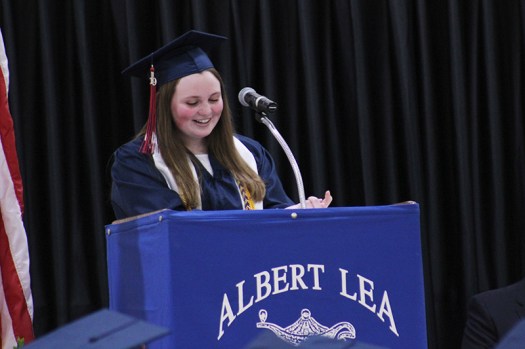 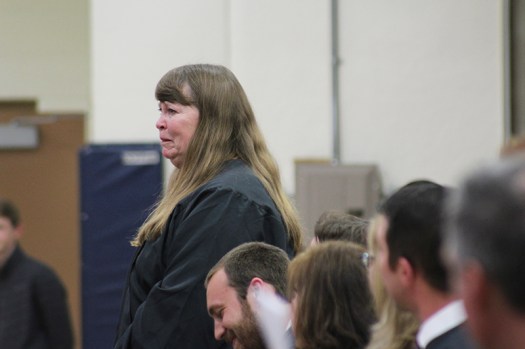 Albert Lea High School teacher Margo Wayne tears up as she is recognized for her 42 years of teaching at Friday's commencement ceremony. Wayne is retiring. Students and staff gave Wayne a standing ovation for her work. Sarah Kocher/Albert Lea Tribune

Both student commencement speaker and graduate Katie Funk and Albert Lea Area Schools Superintendent Mike Funk emphasized the uniqueness of the class and its individuals — Katie Funk via a theme centered around technology, and Mike Funk through an Avengers analogy.

According to Mike Funk, part of the reason the Avengers franchise has had the success it has is that the movies deal with individuals with special powers who also happen to be human.

“Graduates, each of you has a unique skillset you have developed during your time here,” he said.

He encouraged students to work together to meet challenges, as the most close-knit teams he has worked with are the ones who have seen the most success.

“Do not go it alone,” Mike Funk said.

Katie Funk said what makes the class distinct is how it has grown up in a way no one else had before or would after. As the class grew from its infancy, so did technology. Katie Funk cited technology changes in the classroom and the implementation of e-learning days as ways technology has changed their education.

But Katie Funk also emphasized the importance of the human element during those years in school.

“Technology has changed the way we learn, but it is still no replacement for great teaching,” she said, thanking teachers for “pouring your hearts and souls into our education throughout the years to truly prepare us for this world. You put so much passion into what you do, and it does not go unnoticed.”

Lynette Emerson, grandmother of graduate Jayden Emerson, said she was sad to see her grandson graduate, though she was excited for him.

She remembers his cute face and curly red hair from when he was younger and she came to visit.

“He’d be sitting in the window, waiting for me to come,” she said.

She said she never missed one of his soccer games. Emerson was a goalie for the varsity team at Albert Lea High School.

Jayden Emerson’s mother, Amy Lambertson, said she will miss attending his soccer games. He has played since he was 6. However, she said her son has plans to play on Riverland’s team in Albert Lea.

Lambertson said she is very proud of her son, though, like Emerson, it is bittersweet.

School board vice chairman Dave Klatt also addressed the class of 2019 with three pieces of advice. Do not be afraid to ask for help, he advised graduates. Pick something to do that is enjoyable three days a week.

“Pick out what’s gonna make you happy and and just do it,” he said.

Finally, he told students what Klatt said he told the students he coached in football: that you take a yard inch by inch.

“If you take it a little bit at a time, your life and everything else is gonna be a little bit easier and more enjoyable,” he said.

For graduate Jessica Fernandez, that next inch is attending Riverland in Austin. She said she intends to study cosmetology because she likes the opportunity it provides to be creative.

For graduate Brady Nielsen, it has not quite sunk in yet.

“It doesn’t feel like anything has happened yet,” he said.

He expects it to hit in the fall, when he does not return to Albert Lea High School. Instead, he plans to start work, likely joining a union in Rochester so he can work with his hands. He said he wishes his classmates success.

But Emerson is thinking a few more inches ahead for her grandson. She said she hopes he continues his education, gets a good job, gets married and travels — and, someday, that he gets to watch his own children graduate, just like him.