Memorial services for Barbara K. Soper will be at 10 a.m. Saturday at Bonnerup Funeral Service in Albert Lea. The Rev. Randy Baldwin will officiate. Visitation will take place one hour prior to the service and burial will be at a later date. 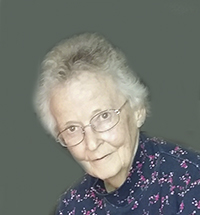 Barbara Kay (Louvar) Soper was born Aug. 23, 1935, in Saratoga, Iowa, to Jerry and “Mayme” (Kakac) Louvar. She attended country school at Saratoga No. 4, graduating in eighth grade at the top of her class. Little did anyone know she was the only one in her class! She graduated from Riceville High School and went to Naeve Hospital School of Nursing, where she obtained her registered nurse degree in 1956.

Barb met the love of her life through mail, as Darrell got her name and information from an acquaintance in the service. It would be six to eight months of writing before the two would meet in person.

Darrell must’ve been quite the writer, because on Nov. 30, 1957, the two were married in Riceville. The couple was blessed with 61 years of marriage.

Barb started working as a surgery and emergency room nurse at Naeve Hospital. During the last 30 years of her career, she was a nurse at St. John’s Lutheran Community. After retirement she did in home health care for numerous families until just a few years ago.

She was talented at counted cross stitching. Later in life, Barb took up crossword puzzles. She became a Minnesota Twins fan, mainly because Darrell would always have it on TV. She can be described as a sweet, loving, faithful and devoted woman who loved her family more than anything.