Carl Wettlaufer was preceded in death by his parents Carl Jacob and Birdie Wettlaufer; sister, Edith; brother, Allen; and his wife, Ruth. He is survived by his four children with spouses, Jay (and Fenlan) Wettlaufer, Jill (and Steve) Gustafson, Jean (and Stuart) Dimmel and Judy (and Kris) Rawle; as well as 12 grandchildren and five great-grandchildren; brother, Gordon; and numerous nieces, nephews and extended relatives. 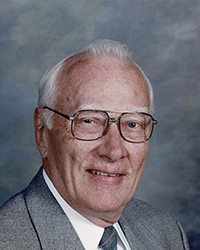 Carl was born to a farming family in Bottineau, North Dakota. He attended school in Omemee, North Dakota, where he often spoke of a one-room school experience and riding a horse to school in bad weather. Known for his intelligence, he was nick-named “Doc” by his buddies who remained lifelong friends after graduating from Bottineau High School in 1947.

Carl received an associate’s degree from Bottineau’s North Dakota School of Forestry in 1949, and a bachelor’s degree in engineering from North Dakota Agricultural College in Fargo, North Dakota, in 1953.

Loyal to family and country, Carl served stateside during the Korean War, 1950 to 1951, with the U.S. Army National Guard. In Fargo, Carl met the love of his life, Ruth Naomi Taylor. They had a beautiful Christmas wedding in Mayville, North Dakota, in December 1953. Together they faithfully served in the Lutheran churches where they attended in Aurora, Illinois, Mora  and Albert Lea in 1961.

In Albert Lea, Carl was the chief engineer for Streater and his designs are still being used today. He retired in 1993. Proving there was no project he couldn’t handle, retirement included building a lake home on Portage Lake in Park Rapids. Carl and Ruth loved the area during previous years of family vacations nearby. As a fisherman he enjoyed the lake setting and surrounding wildlife — as long as all behaved. When not in Park Rapids, Carl and Ruth filled their time visiting family located all over the country. Fulfilling his hobby of Wettlaufer genealogy provided additional fun trips and new friends. Sadly, Ruth unexpectedly passed away in November 1997.

In the year 2000, Carl remarried Helen Nelson-Chapman, who still resides in Park Rapids. With this union, Carl gained Carolyn (and Steve) Beseke, Heidi (and Dave) Hindt and three more grandchildren. Before Christmas 2018, Carl was moved to his son’s home in Lake Elmo, where he received the extra loving care and attention needed after several strokes. He peacefully entered the Lord’s arms Wednesday, Feb. 13, 2019, with family at his bedside.

After waiting for better travel weather, the funeral will be at 1 p.m. June 15 at Calvary Lutheran Church, 112 Park Ave., Park Rapids, MN 56470. The Rev. Steve Norby will officiate. All are welcome to join the family for a light lunch following the service.

With Carl and his 7-year-old granddaughter both being cancer survivors, a memorial account has been set up with St. Jude in its help to cure childhood cancer and other diseases. Visit St.Jude.org to donate. Go to giftfunds.stjude.org, click “search funds,” under name of gift choose “Carl A. Wettlaufer” and continue as prompted.