Catch of the weekend 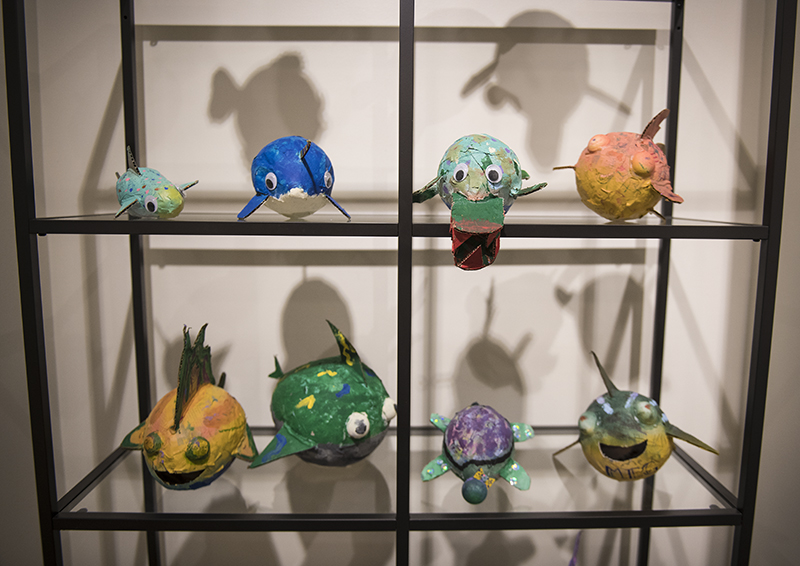 Soon, the larger-than-life bluegill living at the Freeborn County Arts Initiative will have its scales thanks to an overturned plate at a birthday party.

The fish measures approximately 4 feet by 6 feet, Freeborn County Arts Initiative board consultant Elisha Andrew Marin said. The fish — a bluegill rather than a walleye following a vote, as the former was deemed the prettier of the two — will have light-up eyes and paper plate scales after one Kids College student intentionally examined the underside of their plate. These could be fins or scales on a fish that had at first been planned with smooth sides.

It is the largest piece in a show that mixes work from Kids College, an arts enrichment program, and St. Theodore Catholic School students as well as professional artists in the gallery’s first show that mixes children and adult art, Crane said. All of it is part of “Something Fishy,” the Arts Initiative’s show planned to coincide with the Governor’s Fishing Opener, the celebration of which begins Friday. 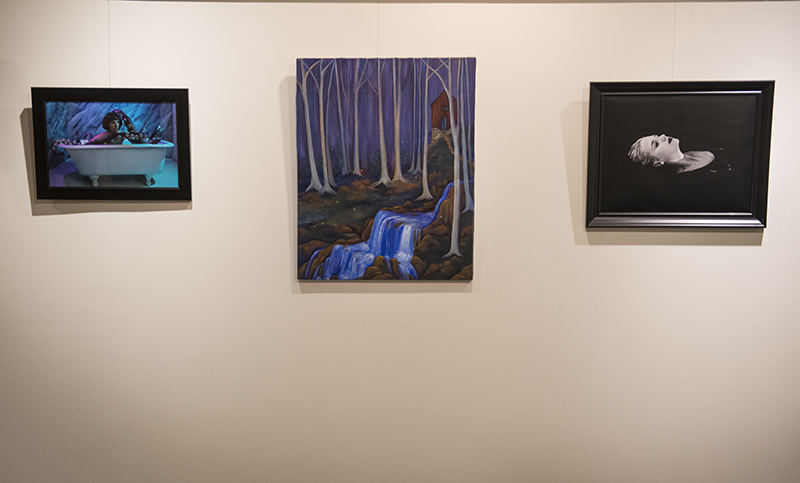 It is the gallery’s first show that mixes children and adult art, according to local artist and Kids College mentor Susanne Crane. – Colleen Harrison/Albert Lea Tribune

The biggest fish of the weekend had been kept under wraps behind a door labeled “Fish factory.”

“We want it to be a beautiful surprise for everybody,” Crane said of the bluegill and the show.

The fish was hatched in collaboration with retired Disneyland art director Tom Butch, whom Marin said walked through the design with students from digital mockups to its scale model. Butch and a friend also helped construct the core of the sculpture. Crane said she teaches her students that art is not devoid of math and engineering. The fish is an example of this.

“I think hometown pride is another thing that we’ve seen,” Marin said.

Amongst acrylic, watercolor and sculptural pieces is a dark-haired woman in a bathtub, bathed in eerie light. Ursula-esque purple octopus tentacles spill from the tub in Minneapolis-based photographer Marla Klein’s creation.

Those same octopus arms occupy the bottom shelf of a set that displays rotund papier-mâché fish created by St. Theodore students. Peppered in amongst those are a crocodile, some narwhals and a few turtles. One has a shock of black hair. Meet Harry Water, the fish who lived.

“It’s a celebration of our lakes, community, fishing and partnership with the governor’s fishing opener,” Marin said of the show. “… This exhibition is a way of showing our artistic support for our community.”

The theme itself is a bit goofy and inquisitive, Marin said. To mirror that, the Freeborn County Arts Initiative will have LED color-changing rope lights strung through the second- and third-story windows of its building. Paper lanterns with blue watery flame bulbs will be hung on the main floor. The hallway ceiling leading back to the gallery will also be transformed with lights, Crane said, into a river. At Saturday’s open house, guests will eat seashell-shaped cookies and Goldfish crackers.

“Everything is just kind of goofily fishy-themed,” Marin said. “… The whole place is (undergoing) its fishy, underwater transformation.”

And, should the weather allow, the bluegill will be on full display on the sidewalk in front of the building, to be caught — by cameras — over and over again.

While people can view the gallery during its soft opening Friday, the reception is from 1 to 4 p.m. Saturday. It is free to the public. The show runs through June 22.