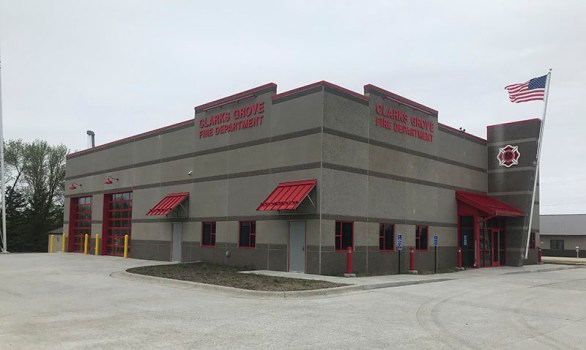 Clarks Grove firefighters moved the city's firetrucks into their new facility when it opened in February. - Kelly Wassenberg/Albert Lea Tribune 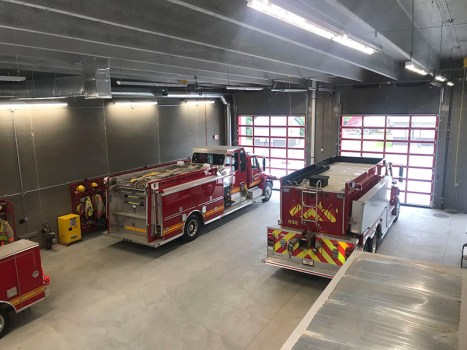 The new fire station in Clarks Grove has more space than the old 1964 building did, which allows room for the larger fire trucks used today. - Kelly Wassenberg/Albert Lea Tribune 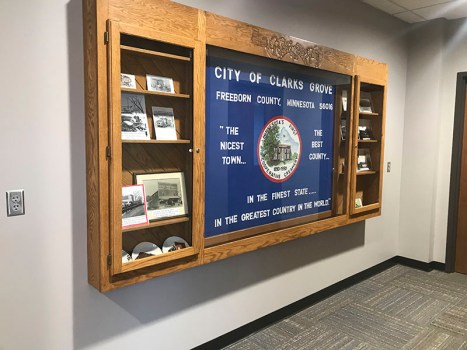 Kathy Jensen and Anita Thisius made a flag that now hangs in the new fire station with some other town memorabilia. The flag was made for the town's centennial in 1990 and bares a slogan coined by former mayor Paul Hanson, "The nicest town, the best county, in the finest state, in the greatest country in the world." - Kelly Wassenberg/Albert Lea Tribune 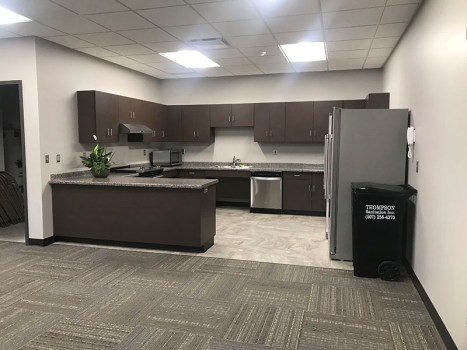 The Clarks Grove Fire Department also houses a community space which includes a kitchen. The space proved useful within the first month of its opening when the Salvation Army provided warm meals to those without power during a February blizzard. - Kelly Wassenberg/Albert Lea Tribune 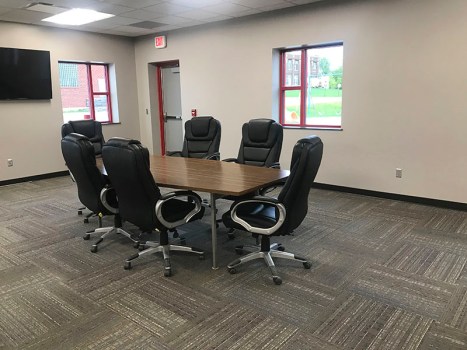 CLARKS GROVE — Clarks Grove Mayor Bruce Hansen isn’t afraid of giving credit where credit is due. When asked how the city was able to build a new fire station without raising taxes on its residents, he pointed straight to city clerk and treasurer Kathy Jensen.

According to Hansen, the city used approximately $400,000 of its reserve funds to pay the difference for the new fire department, which includes a community room with a kitchen. The rest was covered by insurance and a grant from the state tornado fund.

The city hosted an open house May 4 for residents to see the new building, although some already had. During the blizzard Feb. 23 and 24, staff from the Salvation Army came in to provide meals for those without power and a few residents slept at the facility. It was the safest place for them to be, which is what Hansen had hoped for.

During the tornado March 7, 2017, Hansen said the fire department was lucky. No one was killed and the trucks were left undamaged. There were firefighters in the fire hall when it struck, though.

“They were crawling underneath the trucks to try to save themselves,” Hansen said, noting that they didn’t realize just how vulnerable the old building was.

“We were thinking we were sitting pretty good,” he said. “But when they started tearing it down it just crumbled into pieces. It wasn’t built like today’s buildings are.”

Chains were hooked to the bay doors so the fire trucks could be freed from the heavily damaged building and the firefighters of the town could check on everyone else.

“We were lucky enough to have another building in Clarks Grove that was heated that they used while they were building the new building,” Jensen said.

A building committee comprised of two council members and three firefighters made recommendations to the architecture firm that designed the facility, which was built by Wells Concrete. Construction started in May 2018 and finished in February.

“The architects called it their economy building,” Hansen said. “Even though when you drive up to it, and it looks really nice, there are no big thrills.”

Hansen, a former volunteer firefighter himself, said the old building was so tight you could barely walk between the trucks and get your gear on. The new building has ample space for the vehicles the department has and was designed so the building could be added onto later if need be.

There is also office space available for the fire chief and for Jensen, if she should ever want to move out of the space she now occupies in the city’s museum.

Now in her 70s, this is the second tornado Jenson has witnessed in the area. The first was in 1967 and hit her father’s gravel pit that was southwest of town.

There is no hesitation in her voice as she recalls the memories of the day. They are just as clear as her memory from the latest tornado.

“It was just white,” she said. “You couldn’t see across the street, but you didn’t think it was a tornado on March 7. By the time we thought of going to the basement it was over.”

Jenson hopes her town never sees a tornado again — at least not in her lifetime, but like Hansen, she takes comfort in knowing the new building was built to withstand an F3-plus tornado.

“It’s the core of the community,” Hansen said. “We’re proud of it.”