A memorial service for Connie Bergland will be at 11 a.m. Saturday at Bonnerup Funeral Service in Albert Lea. The Revs. John Scherb and Randy Cirksena will officiate. Visitation will take place one hour prior to the service. 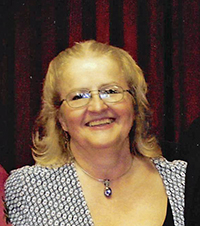 She graduated from Lindberg High School in St. Louis in 1961 and attended a few years of college. While in St. Louis she had several jobs, but a favorite of hers was being a relocator for one of the oldest agencies in St. Louis. After she moved to Owatonna, she worked at Viracon for 10 years before retirement.

On Dec. 27, 1999, she was united in marriage to Gary Bergland in Sioux Falls, South Dakota.

The couple would make their home in Clarks Grove.

Connie was a member at United Methodist Church in Glenville. She loved her church and her church family. Connie served as the United Methodist Women president for years. Antiques, fishing, refurbishing and gardening were some of Connie’s favorite activities, and she was known for having very rare yellow peonies. Above all, time spent with her family was what made Connie happy. Attending as many grandchildren’s activities as she could was something she always looked forward to. She was intelligent, loving and caring.

She is preceded in death by both parents; father-in-law, Truman; sister, Sandra; brother-in-law, Brian Lien; and a nephew, David.