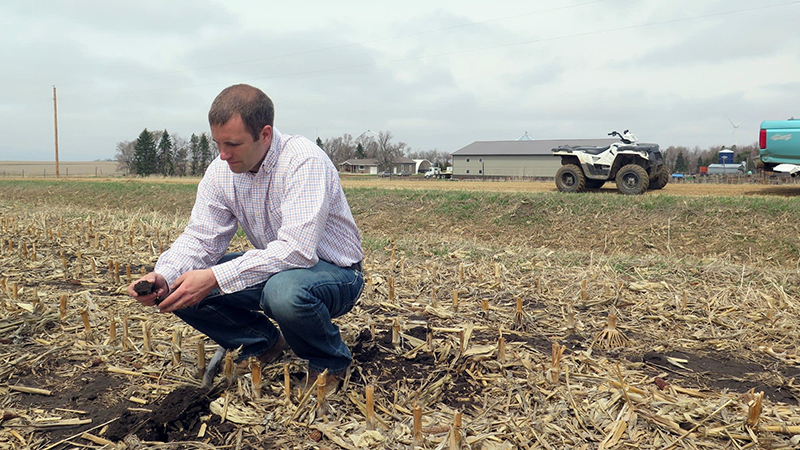 Brian Fruechte examines the soil on his southwest Minnesota farm last spring. Spring planting is about two weeks behind, and it will soon be too late to plant and expect an average harvest. - Mark Steil/MPR News

A soggy spring has kept Minnesota farmers out of their fields for weeks — and they’re running out of time to get their spring seeds in the ground.

And for corn growers in most of the state, another deadline is looming: If bad weather prevents them from getting their crops planted by the end of May, they can apply for an insurance payment for what’s called “prevented planting.”

Corn and soybean planting are about two weeks behind average in Minnesota, according to the latest U.S. Department of Agriculture crop report — and farmers will soon need to decide whether they’ll try to plant late, and run the risk of losing their crops to an early frost, or if they’ll work up to the deadline and take a loss on the seeds they’re not able to get into the ground.

Kirby Hettver has about a third of his corn crop planted. But the persistent rain has put his spring planting on hold.

“We didn’t plant a seed last week,” he said Tuesday. “And I don’t know how many others are in that same category.”

Hettver raises corn, soybeans and alfalfa near DeGraff, Minn., about 30 minutes northwest of Willmar in Swift County. He’s not alone: According to the USDA’s weekly agricultural survey, in Minnesota only two days last week were considered suitable for fieldwork, “where weather and field conditions allowed producers to work in fields a major portion of that day.” Last year at this time, that number was five and a half.

“It’s not like we’ve gotten huge amounts of rain, but they’re coming at just the right time. Just about when you get out to the field, you get a shot that keeps you out of the field,” said Hettver.

Even though he knows time is running out to plant corn and expect a strong yield, Hettver said he plans to keep trying to plant into early June. He’s betting that this wet spring across the Midwest will mean higher demand — and higher corn prices — at harvest, so he wants a crop to harvest, even if the yield is below average.

“In my farming career, we have not ever been delayed this long, in terms of planting. My father-in-law who’s in his early 80s made the comment yesterday that he’s never seen a spring like this, and obviously he’s been around and seen a lot of springs,” Hettver said.

Planting is also slow to the southwest, on Brian Fruechte’s Lincoln County farm. Only about 15 percent of his corn seed is in the ground — and what’s there isn’t doing especially well. 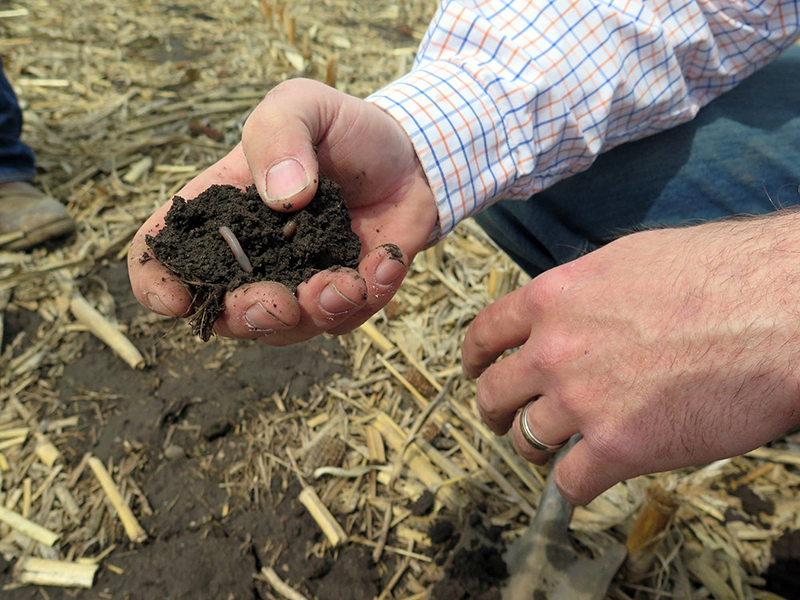 A soggy spring has kept Minnesota farmers out of their fields for weeks. – Mark Steil/MPR News

The seed is likely germinating slowly because the soil has been colder than normal. In addition to farming, Fruechte sells crop insurance in his area, and he said he expects every one of his customers to have an insurance claim for acres they can’t plant because of cold, wet conditions.

“There’s plenty of guys that have not turned a single wheel, haven’t planted a seed yet,” he said.

Farm finances were already strained after several years of low crop prices, but Fruechte worries this year will break some farmers’ finances.

“The last couple of years, we’ve really been saved by having outstanding yields,” Fruechte said. “It seems like next year will really be the strain, when (farmers) don’t have a crop to help their cash flow for the next year, if you’ve got empty grain bins.”

For some, the best financial option will be to take the prevented planting insurance payment, if they’re unable to plant by the designated time for their crops, said University of Minnesota agriculture economist Marin Bozic. But those payments, he said, can only go so far.

“The prevent plant is hardly going to substantially or in any meaningful way augment their income relative to planting, if they had the ability to plant,” he said. “It is just designed to make sure nobody goes bankrupt in a year when weather just does not cooperate.”

It’s a complicated decision for farmers: Should they plant a late crop and hope that a smaller yield will balance out, with higher prices at market in the fall? Or should they save the cost of planting and take the insurance payment?

The decision is complicated even more, Bozic said, by the Trump administration’s recent announcement of a second round of payments to farmers designed to offset recent Chinese crop tariffs. Bozic says those payments will be based on how many acres farmers plant, but the Department of Agriculture hasn’t yet announced the amount of money farmers would be paid for each crop.

“USDA fumbled this time,” he said. “They would have been smarter to wait for a few more weeks before declaring anything. They have deliberately withheld any information on the size of the payments.”

Bozic worries that, given the uncertainty, some farmers might end up planting too late in the year in hopes of qualifying for the trade assistance, or make a last-minute switch from corn to soybeans. Either could prove to be a miscalculation. He said he wishes the aid announcement had been timed so it would avoid influencing farmers’ planting decisions and have a minimal impact on crop markets.

David Bau, an educator who works with the University of Minnesota Extension in southwest Minnesota, said he thinks farmers watching the soggy weather across the corn belt will take risks — like planting late, knowing it’s possible they’d lose a crop to an early frost in the fall — just to get their corn planted this year.

“The corn prices have been rallying because of the wet conditions, so that’s helping the markets,” he said. “Looking at the markets and the economics, I think they want to get the corn in now, if they can.”

Bau said a cooler-than-normal summer is shaping up in some long-range weather outlooks. If that happens, it will be even worse news for farmers hoping a late-planted crop can turn into a decent fall harvest.