Memorial services for Dale Turner will be at 11 a.m. Friday at United Methodist Church in Albert Lea. The Rev. John Mitchem will officiate. Visitation will be from 5 to 7 p.m. Thursday with a Masonic service at 7 p.m. at Bonnerup Funeral Service in Albert Lea. There will also be visitation one hour prior to the service Friday. 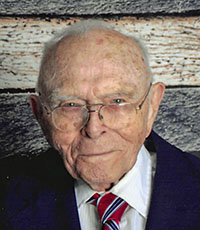 Dale William Turner, an Albert Lea resident, was born in Spring Valley, the son of Henry W. and Ethel W. (Flathers) Turner, on Aug. 1, 1924. He was baptized and confirmed at Evangelical United Brethren Sumner Center Church. He graduated from Stewartville High School and then attended auctioneering school.

He married Adean A. King of Stewartville on June 13, 1953, at Evangelical United Brethren Sumner Center Church.

Dale was very active in the community, including his longtime membership in Kiwanis, Masonic Lodge No. 63 Pleasant Grove, Albert Lea Shrine Club, lifetime member of Order of the Eastern Star, past president of the Albert Lea-Freeborn County Chamber of Commerce, member of the Board of Directors of Minnesota Hotel Association and United Methodist Church.

As a young man, Dale began working on the farm with his dad. He later worked more than 30 years for Kahler Corporation, where he was assistant manager in Rochester for nine years, manager in Owatonna for nine years and finished his career with 12 years in Albert Lea.

In his early years, Dale was an auctioneer for several years and loved to carve duck models out of wood. He was also an avid cribbage player. Dale and Adean enjoyed camping all over the United States and Canada. He enjoyed being a member of the Cross Roads Camper Group.

He enjoyed a good game of cribbage, fishing at Lake Kabetogama, feeding the birds and cherished annual visits to family in Michigan and Florida every October. Every Saturday morning, Dale looked forward to going to morning coffee with his friends at Marketplace Foods.

In lieu of flowers, memorials are preferred to Mayo Clinic heart research, United Methodist Church or to the donor’s choice.