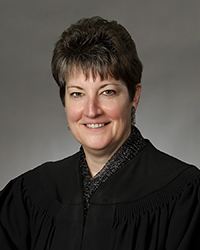 The Minnesota Legislature is currently reviewing the budget request of the third branch of government: the judiciary. The Minnesota judicial branch is just 1.5% of the state’s general fund budget. A fully-functioning judiciary is one of the first promises made in our Constitution. In order to fulfil this promise, the Minnesota judicial branch’s legislative request, which is crafted over the course of eight months, includes funding for treatment court funding stabilization, two additional judges and staff, judge and staff compensation and benefits, cybersecurity enhancements  and mandated psychological exams. There are many areas of the judiciary that would benefit from additional funding. We develop budget requests that reflect the highest needs of the branch, but also fit within the constraints of the state budget funding forecast. The five budget priorities put forward this year are critical to ensure access to justice, efficient and skilled administration and timely outcomes for Minnesotans.

In Minnesota today, there is a need for two additional judges and staff. The growing complexity of the cases coming before trial courts is the primary driver of this need. Complex cases include those involving children in need of protection or services, which have increased by 42% in the last four years, and cases involving a transition of a child or children from a biological parent(s) to a foster home or other care provider, which have increased by 69%.

Retaining and attracting high-quality judges and staff will always be a challenge because we can rarely compete with large law firm salaries. The judicial branch strives to be an employer of choice in many ways — one of which is by staying competitive with the salary ranges of other government employers. Our budget request includes a 3.5% salary increase for judges and a 3.5% pool for staff compensation and benefits. The already tight labor market makes this funding even more important as we look to the future. By 2022, almost 40 percent of all judges who were on the bench in 2017 will have either retired or will have turned 65 years old, and one-third of current judicial branch staff will reach retirement age in the next 10 years.

The Olmsted County Drug Court is one of five problem-solving courts that will see its federal start-up grant expire this year. The collaborative program has 25 participants currently enrolled, who are held accountable to high standards and random but regular drug tests. By reconnecting offenders to a sober life, treatment courts can actually save money, according to a National Highway Traffic Safety Administration study. The judicial branch is seeking to add the Olmsted County Drug Court to the statewide funding system to ensure the court can continue.

The judicial branch is responsible for the safety and security of a magnitude of public, private and sealed information regarding Minnesotans involved in the judicial system. We take very seriously the responsibility to keep that data protected so that Minnesotans can have confidence in their judicial system. The $5 million for cyber security will combat the risk of major data breaches, data corruption, system outages, document or data loss, and cyber-attacks.

The final area we seek funding for is mandated psychological exams. The cost of these assessments, which are required for civil commitment and criminal cases, has increased, and more people in need of these exams have entered into the court system.

The judicial branch worked to make these requests appropriate to the realities of the current budget forecast. A court system that is fully functioning safeguards democracy, secures the rule of law and ensures public safety. I ask you to join me in supporting this budget request. We are counting on the Legislature and governor to fully-fund the judicial branch so that we can uphold the promise of our Constitution and ensure access to timely, equitable and effective administration of justice for all Minnesotans.

Chief Judge Jodi L. Williamson was appointed to the district court bench in January 2000. She has served as the chief judge of the 3rd Judicial District since July 2017. Minnesota’s 3rd Judicial District serves these 11 counties in southeast Minnesota: Dodge, Fillmore, Freeborn, Houston, Mower, Olmsted, Rice, Steele, Wabasha, Waseca and Winona. She is chambered in the Dodge County Courthouse in Mantorville. The District has a total of 24 judges and one referee serving the more than 467,000 citizens of the District. In 2018, nearly 65,000 cases were filed in Third Judicial District courts.