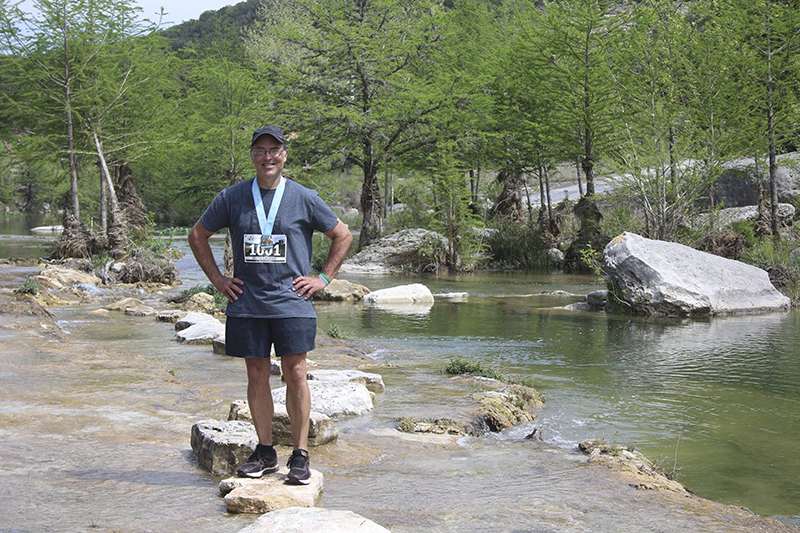 Bryce Gaudian of Hayward recently competed in the Headwaters of the Frio Marathon on Big Springs Ranch for Children near Leakey, Texas. - Provided

Bryce Gaudian, of rural Hayward completed his 18th marathon on trails crossing the rugged and isolated terrain of one of the most historic ranches in the Texas hill country, according to a press release. Gaudian participated in the Headwaters of the Frio Marathon on April 6 on the 7,050-acre Big Springs Ranch for Children near Leakey, Texas.

The fundraising event, held during April’s Child Abuse Prevention and Awareness Month, highlights the mission of sister ranches Hill Country Youth Ranch near Ingram, Texas, and Big Springs Ranch for Children, whose work brings healing and restoration to children who have been victims of abuse, abandonment, neglect and severe trauma, the release states. The difficulties and obstacles experienced on the marathon course are a metaphor for the “marathon” the children face daily toward wholeness. This historic ranch was donated for the ministry to children by Oma Bell Perry, great-grandniece of Stephen F. Austin, who is considered the father of Texas, according to the release.

Gaudian has been involved in five previous UltraHikes on behalf of the ranches to raise funds for their work. He now serves on their auxiliary board and was last year’s race director for the inaugural Headwaters of the Frio Marathon/Half marathon (which also added a 10K this year, and there are plans to include a 5K for next year’s event, planned for April 4, 2020).

This year’s marathon/half marathon/10K drew in close to 100 runners/hikers. Information about the ranches can be found at www.youth-ranch.org.