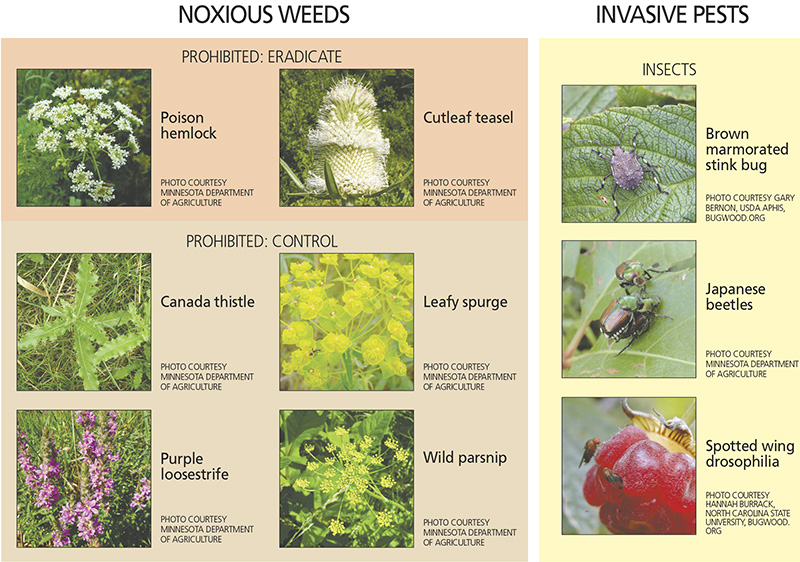 Invasive species in county, state cause problems for growers, gardeners, others

Gardeners, farmers, county maintenance personnel and the Minnesota Department of Agriculture may be fighting some common enemies again this season: those blooming where they were not planted.

Summer typically marks a rise in invasive species reports as more people are outside and the growing season gets underway, said Minnesota Department of Agriculture Director of Plant Protection Division Mark Abrahamson. For community members, many of those reports are driven by what species people are hearing about, as people may be more likely to watch for them. More often, reports of invasive species come from natural resource professionals, he said.

Thirteen invasive plants named on Minnesota’s noxious weeds list — and two on its list of specially regulated plants — are tenants in Freeborn County, based on information from reported and verified sightings. Of those, Freeborn County Ag Inspector Dave Rasmussen’s concerns are those listed under the prohibited section. According to the Minnesota Department of Agriculture, prohibited noxious weeds are annual, biennial or perennial plants designated as being harmful — or having the potential to be harmful — to human or animal health, the environment, public roads, crops, livestock or other property.

Prohibited noxious weeds are further categorized as those to be eradicated and those to be controlled. Plants on the eradicate list are those not present or not yet widely established in Minnesota, and all parts of the plant above and below ground must be destroyed when found.

Prohibited noxious weeds to be controlled are already established throughout Minnesota statewide or throughout regions of the state. Efforts must be made to prevent their spread, maturation or propagation in an effort to reduce population and prevent reproduction, the Minnesota Department of Agriculture stated.

Largely, the Freeborn County Highway Department deals with noxious weeds when it responds to calls, Rasmussen said, and often about noxious weeds growing in county ditches. Most of the concern and calls are about Canada thistle, he said.

But it can be difficult for the Highway Department to make headway.

“We’ve been working for years to control that, and it just, it’s so hard,” he said.

The main problem is volume of county roads and thistle seeds — there are a lot of both, Rasmussen said. Additionally, there is plenty of Canada thistle located on private land.

When he receives a call about noxious weeds on private lands, Rasmussen will verify whether they exist on the property in question and contact the owner. The landowner typically addresses problems quickly and without issue, he said.

If the county catches noxious weeds early enough, the road crews can spray. If the plants are already seeding, Rasmussen said, it makes more sense for them to mow.

“Once they start dropping their seeds, the spray isn’t going to act quick enough,” Rasmussen said.

Reports in the county also show the presence of another weed marked for eradication: cutleaf teasel. Minnesota Department of Agriculture senior communications officer Allen Sommerfeld said the cutleaf teasel was reported at the Geneva north-bound entrance onto I-35.

When someone reports a noteworthy invasive species that is new to an area, Abrahamson said the Department of Agriculture starts asking for pictures, instructing the reporter of what they need to have in that photo. Many can be ruled out by a picture alone, Abrahamson said.

But if the species does look like it could be an invasive one, the department will follow up with a field visit and work with the local government to set up a management program.

But it is more than invasive plant species that have taken root in Freeborn County. Case in point: the brown marmorated stink bug.

The insect has a wide range of host plants and has spread quickly across the country. In Minnesota, it has been a resident for about 10 years, Abrahamson said.

The pattern starts with the stink bug as a household nuisance as it overwinters in people’s homes. People may notice them by hundreds and thousands in their home, Abrahamson said.

In agricultural areas, the brown marmorated stink bug will eventually become a pest to growers. In the mid-Atlantic, the bugs have caused a problem on tree fruits.

The bug is a hitchhiker, commonly moving in boxes or vehicles.

“In Minnesota, we’re at the point now where we’re starting to pick it up in agricultural settings,” Abrahamson said, citing some apple orchards in the Twin Cities.

While other areas in the state have not seen the population build to that point yet, Abrahamson said it will likely become present in impactful numbers.

Brown marmorated stink bugs are eclipsed in residency by Japanese beetles, who have been present in Minnesota for longer than people think: namely, since 1968, University of Minnesota Extension entomologist Jeff Hahn said.

However, the insect has become more abundant and damaging in the last 15 to 20 years. They are found primarily in the Twin Cities and southeast portion of the state, including Freeborn County.

Moist soil makes it easier for Japanese beetles to survive. Steady rain in the Twin Cities for the past three summers has corresponded with increased Japanese beetle numbers, Hahn said. He said he would not be surprised if populations in other areas followed the same pattern.

“People had issues last year, and especially if you’ve gotten regular rains, then I would anticipate them for this year,” Hahn said.

Many people ask whether they can head the beetles off by treating them when they are still grubs. Unless you have turf damage, Hahn said, do not apply fertilizer. It is an unnecessary application.

Japanese beetles are decent fliers as adults, Hahn said, so they can come from several miles away. What one citizen does in their yard will not impact their own plants, especially if they are growing plants attractive to Japanese beetles.

There are some species Freeborn County has not encountered. As of now, the county is not believed to be home to Palmer amaranth, a plant listed on the state’s prohibited noxious weeds list to be eradicated. But Freeborn County is at a slightly higher risk than those further north, as the noxious weed has been found in many counties in Iowa.

For many invasive species, people are the movers, Abrahamson said.

“Where there are more people, there’s more opportunity for spread,” he said.

Communities tend to have a large number of ash trees, Abrahamson said, so the insect can have a big impact in the community.

The newcomer is the spotted wing drosophila, first found in Minnesota in 2012.

The small insect looks similar to a fruit fly, but with one recognizable distinction on males: a fairly conspicuous black spot on its wingtips.

“This has become a pretty devastating pest on all kinds of soft-skinned fruits,” Hahn said, listing raspberries, cherries, strawberries, blueberries and some grapes. To this list, the state department of agriculture adds blackberries and plums.

And while fruit flies go after fruits that are overripe, declining and rotting, the spotted wing drosophila will also go after healthy fruit.

“That’s also why it’s particularly damaging problem, because it’s not waiting for things to be too old or overripe,” Hahn said. “You know, they’re going after all the fruit as it is in the process of ripening, and that’s where we, you know, get really significant loss.”

According to the Minnesota Department of Agriculture, the crop hit hardest in Minnesota has been its raspberries.

“It is spread throughout the state,” he said. “It actually arrived and was found in many counties the first year, and they are not necessarily keeping track in every count, but it’s pretty widely believed that they’re everywhere.”

Still, Hahn said entomologists are still learning about the insect. They still are not quite sure how the flies spend their winter and whether they survive until spring.

“It’s really hard to predict who’s going to see it, although I will say, once an area has it, it usually consistently becomes reinfested,” he said.

Spotted wing drosophila’s presence in Minnesota has transformed the fruit-growing experience from a fairly low-maintenance task to one that is much higher. There are steps that can be done to protect crops, but they take effort.

Sanitation can be helpful, Hahn said. He suggested growers do not allow fruit to over-ripen and remove fruit that has fallen, disposing of it in a garbage bag and allowing that bag to roast in the sun. Burying and composting are not reliable ways to dispose of fruit that may be infested.

Hahn also suggested growers put up traps, which they can learn to construct from the University of Minnesota Extension website, to help determine when to start taking what action against spotted wing drosophila.

“These steps are important and certainly helpful, but then eventually, to really be sure you protect yourself, you end up having to treat with insecticides,” Hahn said.

Growers could also consider management by exclusion: establishing a barrier, like a greenhouse or high tunnel over crops, so there is no physical access to the fruit.

It is not a perfect solution: it does not work for large-acre growers, also excludes pollinators and still risks access through entrance and exit times.

But despite its drawbacks, work with these methods could be promising, especially for a home gardener.

“There is some hope on the horizon,” Hahn said.

To report an invasive insect or plant, contact the Minnesota Department of Agriculture’s “Arrest the Pest” by phone at 651-201-6684 or email at arrest.the.pest@state.mn.us.

Prohibited noxious weeds are plants designated as being, or having the potential to be, harmful to human or animal health, the environment, public roads, crops, livestock or other property. Weeds on Minnesota’s eradicate list are not considered present or widely established in the state.

Weeds on the control list are established throughout regions of Minnesota or the state as a whole.

Restricted noxious weeds are widely distributed and can do similar damage to prohibited noxious weeds, but whose spread is only considered controllable through prohibition of their import, sale or transportation of propagating parts.

Specially regulated plants are species that may be native or of demonstrated economic value, but that also have the potential to cause harm in uncontrolled environments. They pose ecological, economical, or human or animal health concerns.