Memorial services for Janice “Cooki” Westrum will be at 1 p.m. Friday at Trinity Evangelical Free Church, 10658 210th St. W. in Lakeville. Following the service, guests are invited to stay for dessert and fellowship.

Janice “Cooki” Westrum, 84, of Apple Valley died surrounded by family on Friday, May 17, 2019, at Legacy of Farmington. Her beloved husband of 65 years, John Westrum, preceded her in death four months earlier. 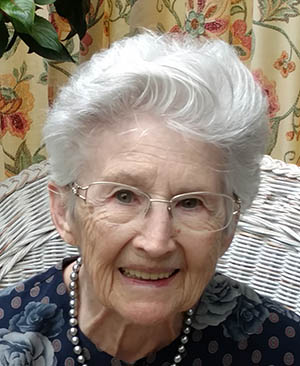 Cooki graduated from Albert Lea High School in 1953, and was a member of First Methodist Church in Albert Lea. In a church youth group she became acquainted with her future husband, John Westrum. Cooki often fondly recalled a sledding party on a particularly cold day. The other girls in attendance were insufficiently dressed for the blustery cold, so they had to retreat indoors to warm up. Cooki, however, had dressed for the weather in her father’s heavy wool pants. This impressed John, who became determined to woo Cooki with his charm, wit and even a poem about the Northwestern bank Weatherball.

Cooki and John were married in 1952 in Iowa, with only two friends to witness their marriage. They kept the marriage secret for a few weeks, while they both went back to their respective schools. The many letters sent between them in those early days have been lovingly preserved all these years. John and Cooki added three children to their family while sharing the spacious home of John’s parents, Nora and E.F. Westrum. Then, in 1963, they moved to the lovely home they’d built on Fountain Lake.

Cooki excelled at hosting dinners and gatherings and enjoyed many times at the lake, skiing, learning tricks on water skis and having bonfires.

Cooki attended courses at four different colleges throughout the years and persevered to complete a double Associate of Arts degree in 1978. She obtained her Realtor license and was recognized for exceptional sales volume multiple times.

Cooki and Big John were a team, and their love for each other influenced many around them. She was the love of his life, and he was hers. They played and worked together and loved being with family, whether at the lake, fishing or for holidays. Her grandchildren delighted in sharing fun activities that she planned, whether it be a cruise, a kite-flying day or a fishing trip. Cooki hosted many family gatherings, and many dear nieces and nephews felt like one of her children, as she lavished welcoming love on them.

Cooki will be greatly missed by those she leaves behind, including her children, John Jr. (Judy) of Prior Lake, Roxanne (Jeff) Thompson of Harmony and Keith Westrum of Portland, Oregon. She delighted in her six grandchildren both as children and adults, and has been adding great-grandchildren, with a current count of 11.