John W. Hagedorn, 69, of Northwood passed away Friday, May 24, 2019, at Mayo Clinic Health System in Albert Lea surrounded by his family after a very brief battle with cancer. 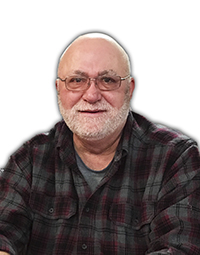 A memorial service will be at 11 a.m. Wednesday at First Lutheran Church, 309 Ninth St. N, Northwood, IA 50459, with the Rev. Barbara Wills of Peace Lutheran Church officiating. Burial will be at a later date. The family will greet friends from 5 to 7 p.m. Tuesday at Conner Colonial Chapel, 1008 First Ave S., Northwood, IA 50459. Visitation will continue one hour prior to the service at the church.

John Wallace Hagedorn was born Dec. 15, 1949, in Rochester, the son of Wallace J. and Burdean (Zierke) Hagedorn. John grew up in Rochester and attended John Marshall High School, where he graduated  in 1968. It was then that John enlisted into the United States Army. He honorably served his country from November 1968 until his honorable discharge in November 1971.

On November 17, 1973 John married the love of his life, Laura J. Jessen, in Rochester. The couple was blessed with four children, Christine, Cassandra, Ellie and Jeffrey. John began work as a lineman in Owatonna for the NW Bell telephone company in 1972.  In 1977 he transferred to Albert Lea, where he worked until his retirement in 2002, having worked over 30 years for an ever-changing telecommunication company.

John was a very involved father and grandfather. He attended most of the kids’ music programs, games and tournaments, whether it was as a spectator or as their coach. For 15 years John coached youth hockey and had a love for all sports.

In John’s youth he would spend many summers at the grandparents’ farm in Elmore to help with the farm work and spend time with cousins, which he truly enjoyed. He found a love for woodworking by building and creating things with his own two hands. The family looked forward to summer vacations with time spent boating, fishing and — most importantly — grilling. John was a master behind the grill and loved grilling for the family. But most of all, John’s family was his life. Time spent together with his children, grandchildren and great-grandchildren was irreplaceable.

Those preceding him in death are his parents Wallace and Burdean.