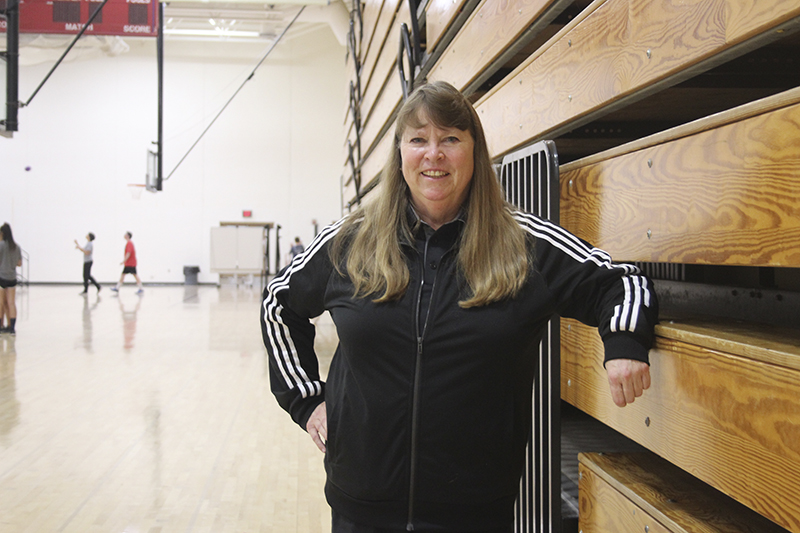 Albert Lea High School coach and health and physical education teacher Margo Wayne is retiring after 42 years of teaching, the vast majority of which were spent in Albert Lea. "I’m so blessed to have been given an opportunity to do something for so long that I love so much,” Wayne said. Sarah Kocher/Albert Lea Tribune

After 42 years teaching physical education and health and just as many coaching a list of different sports, one Albert Lea High School teacher is closing the locker room door on her last year there.

“The kids keep you young and make you old,” she said, laughing.

Margo Wayne, who served as the girls track and field head coach for 33 years and, throughout the years, also coached students in  cross country and volleyball and served a brief one-year stint as dance team adviser.

“The whole team came in in tears,” Wayne said. If they didn’t have an adviser, they wouldn’t be able to have a dance line.

So, as she did for hundreds of children during her career, Wayne laced up to coach.

Wayne got hooked on activity and sports through a 4-H health project that involved a fitness aspect and through which she played softball. When she was growing up, this was the only opportunity for females to play, Wayne said. She was hooked.

“The interest just grew and ever since sixth grade that’s what I knew I wanted to be,” she said.

She graduated high school from Ellendale, where she played all four sports the school offered once girls’ sports were implemented.

Three weeks after Wayne graduated from Winona State University prepared to teach physical education and health with a coaching certificate — she also later earned a master’s in educational curriculum at St. Mary’s University — she got married. She applied for a cross country and track coaching job with Albert Lea Area Schools the day she and her new husband, Milton, left for their honeymoon.

While she was on the honeymoon, she got a call asking her to come in for an interview. Wayne said when she came in, there was a physical education teaching position open — a rarity for a time when teaching jobs were in high demand due to a high volume of teachers, she said.

After five years in Albert Lea, Wayne spent a few years teaching in Freeborn after budget cuts meant the lowest on the totem pole — that was her, she said — was put on unrequested leave. She was rehired when the position was added back.

Wayne said she averaged two seasons of coaching — out of three possible — a year.

“It’s amazing because you can connect with kids on a different level,” she said.

In the classroom, there may be a large number of students, a limited amount of time and a set lesson plan. There is less time structure around athletics, she said, which gave her an opportunity to connect during down time at a meet or after practices.

“There’s no bell at the end that tells you you have to go,” Wayne said.

This connection is part of what people remember about Margo Wayne, boys track and field head coach Kevin Gentz said: She had a great way of communicating with students that she loved and cared about them. She made track and field feel like a family.

“Making sure people felt encouraged and loved was number one,” Gentz said.

This stayed true through the rough seasons.

“When you take your lumps out on the track … it’s nice to have someone there supporting you,” Gentz said.

But she also made track and field fun, Gentz said. On one of the last practices before Easter, he said Wayne would set up an Easter egg hunt around the track for both the boys and girls teams. Sometimes, when the teams jogged to Bancroft Park, Wayne would pull up in her car with a cooler of popsicles.

“She’d give everybody a popsicle and, you know, there would always be smiles there,” Gentz said.

Gentz has taught at Albert Lea High School for 11 years. He came with coaching and teaching experience, but from smaller schools.

“I really felt like a fish out of water,” he said.

Students would walk across the stage at graduation whom he had never had in class. Though he enjoys it now, Gentz said he did not like his first six months in Albert Lea.

But coaching with Wayne was different. Knowing that track season was coming up and he’d be with Wayne was a crutch for him, he said. He worked as the assistant girls track and field coach for two years before taking the job as boys head coach.

“Margo is one of the people who’s really supported me over the years,” he said. “… Margo makes everybody feel like they’ve got a cheerleader in their corner.”

Gentz said he took Wayne out for dinner the night she told him she was no longer going to coach track and field. The two cried together for 20 minutes in an Applebee’s.

“She is the history of girls track and field at Albert Lea High School,” Gentz said. “She’s it.”

There were several factors in her decision to step down three years ago, Wayne said. She had an assistant coach she trusted to carry the program forward. The shift in the school calendar meant track competitions conflicted with some of her family’s hobbies, which became more predominant in the spring. And she said she noticed some things become bigger stressors and stick with her longer.

“When I was coaching track, it was eat, sleep and breathe track,” Wayne said.

But she misses it.

“It’s kind of like being the head coach of 18 different sports at once,” Wayne said.

Competing in college track — primarily as a sprinter in distances 800 and lower as well as high and long jump — watching her son compete as a thrower and having the help of assistant coaches with their own sets of knowledge helped Wayne lead this team of athletes, Wayne said, whom she said were also great to work with.

“I’m just so proud of her for what she did and what she’s meant to the school,” Gentz said.

After the 2016 Albert Lea Area Schools Teacher of the Year and Wall of Inspiration Inductee retires from teaching, she will continue to be an assistant cross country coach.

The end of her teaching and head coaching career does not mark the end of her relationships with students and athletes. She still communicates with several of her former students.

“The connections I’ve made with especially the athletes are living on,” she said.

But after 42 years, she cleaned out her office space in the girls locker room. On Wednesday, Wayne found a small slip of paper she believes fell out of a box and onto the ground. She suspects it came from the night before a Big Nine conference track meet, when everyone was asked to bring an inspirational quote. This one was from Winnie the Pooh.

“How lucky I am to have something that makes saying goodbye so hard,” it said.

“That’s kind of how I feel,” Wayne said. “I’m so blessed to have been given an opportunity to do something for so long that I love so much.”

To this chapter in her life, she is saying goodbye. But also on her desk and behind the quote and two tennis balls — one wearing a badminton birdie like a crown — is a reason Wayne is excited to retire: to spend more time with her dog, Ali, framed in a photo there.

She will also spend some of that time with her family. Her husband, she said, has been supportive of the time she spent with her students.

Now, she said she would like to spend more of that time with him.

She will continue to help with the Freeborn County Fair and 4-H.

She will also continue to care for the approximately 75 rose bushes she uses to fuel winning exhibits at county fairs in Albert Lea, Austin and Owatonna. Retirement may be an opportunity to learn even more about the plants she enjoys caring for, she said.

For Gentz, this part of Wayne is also important.

“What you do with your family during the months of June, July and August are just as important as what happens in the school year,” he said.

He cited her involvement outside of school as learning experiences, and that she has dedicated time to getting involved with her family, including children Tiffany and Travis.

“She knew that you learn by doing,” he said.

Fellow health and physical education teacher Dan Harms said he was a little shocked to hear Wanye announce her retirement. According to Harms, her attitude each and every day said, ‘I want to be here.’

And she was not, Wayne said. For the most part, she loved coming to work.

During her time at school with them, Wayne said she hoped her students learned to be more compassionate, understanding, respectful and responsible.

“I hope that I have given them what they needed when they were with me to help them fulfill what their goals were, are, will be,” she said.

Gentz’s feelings were a mixed bag: While he said he is happy for Wayne, he is also sad for the students to say goodbye to her.

“The district is going to be losing a tremendous teacher and coach, but as they say, all good things must come to an end,” Harms said.

On Wednesday, a pair of students hovered by the office door to talk to Wayne about the upcoming week. In her black track suit and bright blue tennis shoes, she got up to say goodbye to one whom she would not see in class again.

“See you later, alligators,” she called to them as they disappeared around the corner. “Have a great day.”