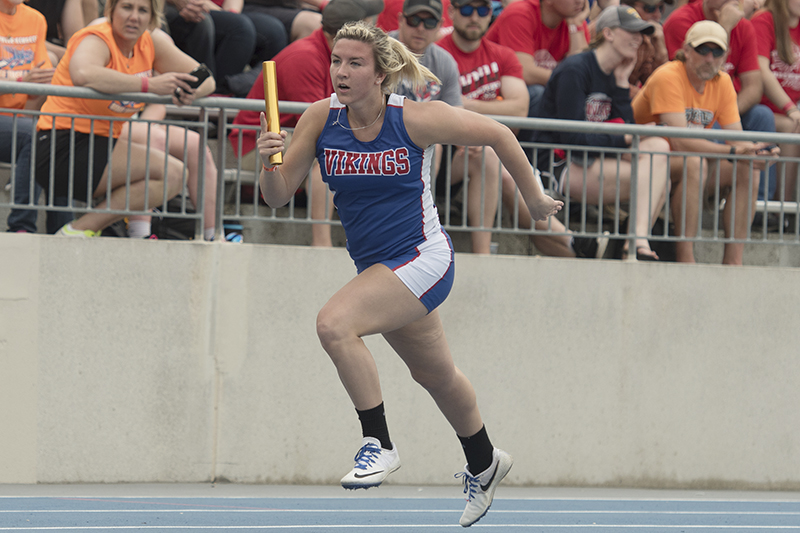 Northwood-Kensett junior Jaela Parks takes off in the first leg of the distance medley relay Thursday afternoon. Parks, along with Carly Hengesteg, Kayla Senne and Josie Einertson finished 16th in the event with a time of 4:30.85. Lory Groe/For the Albert Lea Tribune

Despite the rainy conditions in Des Moines on Thursday morning, the Iowa state track and field meet only delayed for one hour before competition resumed for day two .

Starting the day were the Bulldogs ,who had five events competing in the morning session. 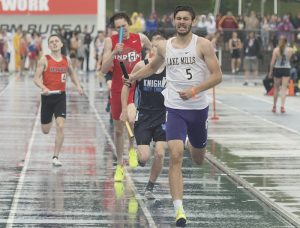 Lake Mills senior Tommy Kaktis crosses the finish line in the distance medley relay Thursday morning at the Iowa state track and field meet. The Bulldogs took first place in their heat and sixth place overall with a time of 3:39.93. Lory Groe/For the Albert Lea Tribune

Bennett Eaton, Carson Eaton, Tommy Kaktis and Mason Fritz brought the team its second 18th place finish of the day in the 4×400-meter relay with a time of 3:30.79.

However, the best finish for Lake Mills came in the distance medley relay when the team of Prescott, Hanna, Fritz and Kaktis won sixth place with a time of 3:39.93.

The Bulldogs will have three events on the final day of the meet: the 800-meter run, the 1600-meter run and the shuttle hurdle final. The running events are scheduled to start at 8 a.m.

The Vikings had 10 events run in the afternoon session.

Wyatt Willand captured a state title in the 800-meter wheelchair with a time of 2:08.19, beating the second-place finisher by nearly seven seconds.

The 4×100-meter relay team of Benjegerdes, Nichols, Logan Mix and Sam Kliment came in fourth place in their heat with a time of 44.85

The Vikings final relay team of Benjegerdes, Schrage, Makaio Hoch and Brandon Varner finished the 4×400-meter relay in fifth place in their heat with a time of 3:33.44.

Nichols also competed in the sole field event for the boys’ team, taking 17th place in the discus with a toss of 127-01.

The girls’ Vikings team participated in three events. Laura Hopperstad took 17th place in the discus with a throw of 105-00.

The distance medley relay team of Jaela Parks, Kayla Senne, Carly Hengesteg and Josie Einertson took 16th place in the event with a time of 4:30.85.

The final team of Einertson, Hengesteg, Lindsey Davidson and Ruthie Conlin came in eighth place of their heat of the 4×400-meter relay with a time of 4:20.51.

The Vikings will compete in six events on Saturday: Einertson in the 800-meter and 1600-meter run, Bejegerdes in the finals of the 110-meter hurdles and Willand in the 100-meter, 200-meter and 400-meter wheelchair races.