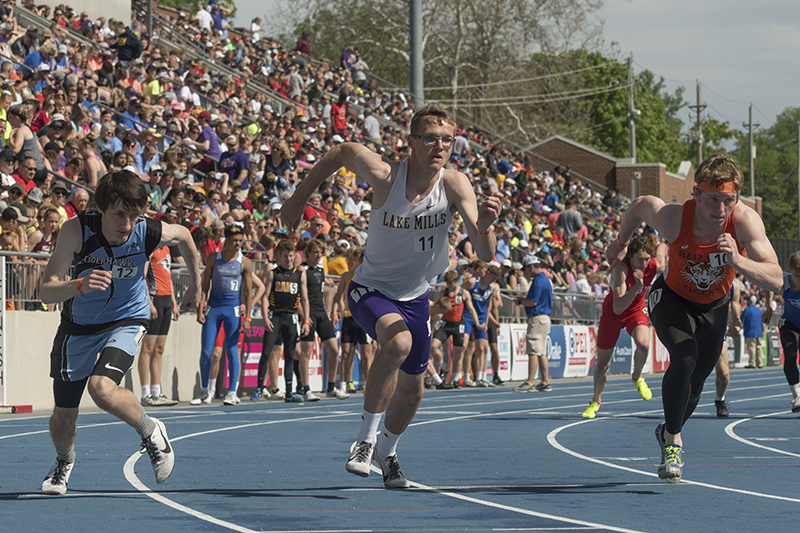 Lake Mills junior Mason Fritz takes off in the 800-meter run Saturday on the final day of the Iowa state track and field meet. Fritz came in 15th place in the event with a time of 2:00.88. Lory Groe/For the Albert Lea Tribune

Saturday marked the third and final day of the Iowa state track and field meet on the campus of Drake University in Des Moines.

Several athletes from the Lake Mills and Northwood-Kensett teams competed for the chance to etch their names in school history.

The Bulldogs competed in three events on Saturday. Junior Mason Fritz ran in the finals of the 800-meter run, ultimately coming in 15th place with a time of 2:00.88. Fritz was just over five seconds behind the winner, who finished in 1:55.67.

The final event had the relay team of seniors Tommy Kaktis and Cael Boehmer, and junior Tyler Helgeson and Bennett Eaton coming in fifth place in the shuttle hurdle relay with a time of 1:02.06.

The Northwood-Kensett boys’ teams had two athletes compete on the final day. Senior Logan Benjegerdes finished his track and field career with a third-place finish in the 110-meter hurdles with a time of 15.45, just .65 seconds behind the winner.

After picking up a state title on Friday afternoon, freshman Wyatt Willand competed in the 100-meter, 200-meter and 400-meter wheelchair races, finishing as the runner-up in each race.