Funeral services for Orren E. Olson will be at 11 a.m. Tuesday at St. Theodore Catholic Church in Albert Lea. The Rev. Kurt Farrell will officiate. Visitation will take place from 4 to 7 p.m. Monday at Bonnerup Funeral Service in Albert Lea, with a time to share memories at 7 p.m. Visitation will also be one hour prior to the service at the church. Interment will be in St. James Cemetery in Twin Lakes. Military honors will be accorded. 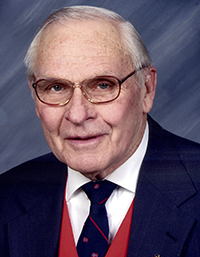 Orren died peacefully with family at his side Wednesday, May 22, 2019, at St. John’s Lutheran Community-Fountain Lake in Albert Lea. He was 92 years old.

When he was 10 years old, the family moved to a farm near Glenville. Orren was proud to have served his country in the U.S. Air Force from 1950-1954.

On Jan. 15, 1955, Orren was united in marriage to Alice M. Leska at St. Wenceslaus Catholic Church in Omaha, Nebraska. They resided in nearby Bellevue for several years.

In 1967, the couple and their family moved to a farm near Alden, which they called home until moving into Albert Lea in 2008. Orren and Alice were blessed with eight children.

Orren worked hard to provide for his family throughout his life. He studied electronics at Coyne Electrical School in Chicago and received additional training while in the service. He worked for Northwestern Bell in Omaha for more than 12 years, farmed full-time for several years, then worked for Montgomery Ward’s in Albert Lea doing electronics and appliance repair. He later operated Double-O Appliance Service out of his home until his retirement.

Community service was very important to Orren. He served as a director on the Freeborn Mower Electric Board from 1997-2008, the Farm Bureau Board and the Alden-Conger School Board from 1972-1990. He was honored and proud to have presented high school diplomas to each of his eight children. A life built on strong faith, Orren was also very active in St. James Catholic Church in Twin Lakes.

Having much pride in his Norwegian heritage, he was active in the Sons of Norway and he enjoyed three trips to Norway to visit extended family.

Orren and Alice loved to dance to big band and old-time music and were a polished pair on the dance floor. It was their favorite activity together. A special trip for the couple was going on a dance cruise in the Caribbean for their 40th anniversary.

Orren will be remembered as a quiet and thoughtful man who was very devoted to his wife and family and generously shared his time to enrich his community.