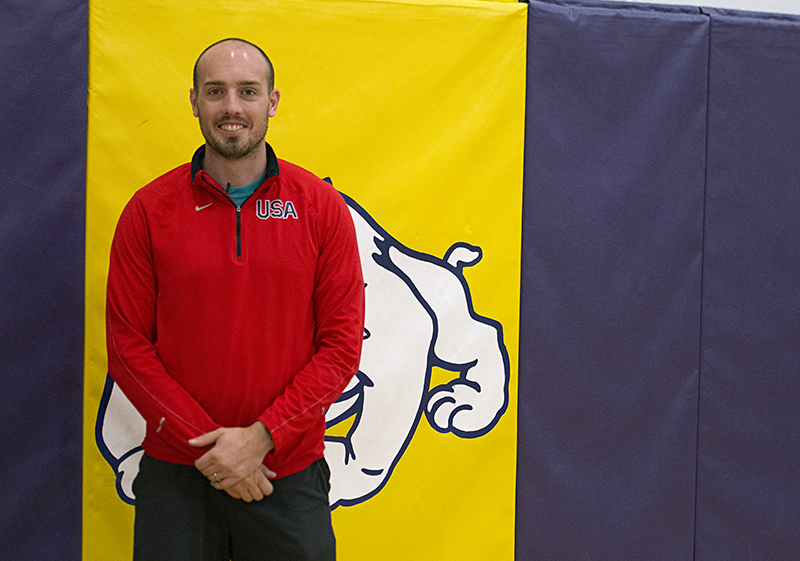 Skyler Ahrens, Lake Mills’ new girls’ track and field coach, has the team headed for success after a third-place finish at the Top of Iowa West Conference meet. A handful of the Bulldogs’ events are on the cusp of qualifying for this season’s state meet. - Tyler Julson/Albert Lea Tribune

LAKE MILLS — In his first year as head coach of the Lake Mills girls’ track and field team, Skyler Ahrens has the team primed and ready for the final stretch of the season.

After spending three years as a volunteer track coach and teaching at Waterloo West, Ahrens followed an opportunity at Waterloo East where he taught and was an assistant coach on the boys’ track and field team for four years.

With a new baby daughter, Ahrens and his wife, Tiffany, decided to move closer to her hometown of Forest City. He took the job as K-12 physical education and health teacher in Lake Mills and the head coach position was open and ready to be filled.

“The track position was open when I got here,” Ahrens said. “I’ve always wanted to coach. Even if the position wasn’t an option, I would still volunteer if the job wasn’t available. Track means that much to me; it’s just something I’m passionate about and really enjoy.”

Ahrens brings plenty of track and field experience to the position. Growing up in Grinnell, Iowa, Ahrens ran track and went on to Wartburg College, where he was a national qualifier in the 4×100-meter relay.

Starting out the season, the Bulldogs were consistently finding themselves at the bottom of the standings at many of the meets they participated in. According to Ahrens, there was a lot of change both he and the girls he was coaching had to get used to. For him, the transition from coaching boys to girls was a minor shift. However, the change in programs his athletes had to go through was significant.

“The girls were used to a certain way, and my philosophies are a little bit different,” Ahrens said. “Change in general, especially philosophies, can be very difficult and frustrating at times. But I think we’ve adapted really well. As the results show, last week we finally clicked and that’s the point.”

Ahrens said his viewpoint this season was to not focus on where the team was placing at the beginning of the season and only worry about three things: conference, districts and state.

At the Top of Iowa West Conference meet Thursday, the Bulldogs claimed third place overall thanks to solid and improved performances all around. Ahrens said the team is still working to get better with the ultimate goal of sending as many athletes as it can to the state meet.

So far, the Bulldogs have a handful of events that have an eye at a state meet qualification. Senior Lyv Arispe and sophomore Taylor Ingledue have traded taking first and second place in the 100- and 200-meter dash all season long. Freshman Brooke Bergo has come on strong in the long jump, breaking the school record earlier this year. The trio of Arispe, Ingledue and Bergo along with junior Megan Groe are a force to be reckoned with in the 4×100- and 4×200-meter relays, winning both at the conference meet.

Ahrens talked about having a wide age range of girls competing at a high level.

“With the older girls, they’ve been around,” he said. “They know what high school track is all about, some of them have been to the state meet before. They’ve bought in and lead by example. For the underclassmen, that’s the future. It’s great for them to be around and experience success at a younger age. Hopefully that sets the tone for these eighth graders and seventh graders as they come through and we continue to build the program.”

The Bulldogs will compete for their chance to qualify for state at the district track meet at 4 p.m. Thursday in Garner, Iowa. In order to qualify for state, individuals or relays can place in the top two in their respective events or be selected as one of the eight best remaining times after results have been compiled from the rest of the state.

Interesting fact: outside of coaching and teaching, Ahrens loves to spend as much time as he can with his wife and their newborn daughter