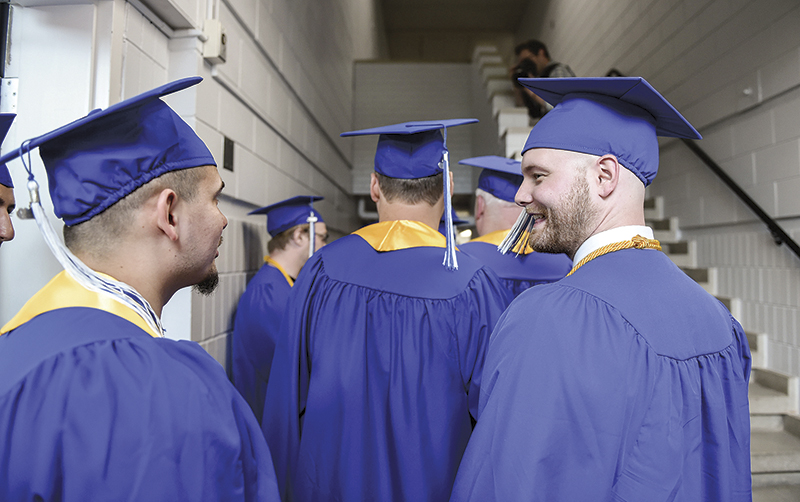 Around 518 students graduated. There were a combined 238 students who walked during the two ceremonies, with 110 students completing career technical programs and 128 students who received their associate degrees.

The keynote speaker for both ceremonies was Dr. Mark Ciota, chief executive officer for Mayo Clinic Health System in Albert Lea and Austin. Gabriel Crombie of Faribault and Deandre Raggs of Minneapolis served as student speakers for the 3 and 6:30 p.m. ceremonies respectively.

Gary Ray received an honorary degree from Riverland, and Kim Hansen, accounting instructor, giving the faculty welcome at both ceremonies.

As each student prepares to decide their own future paths, here are some of their experiences with higher education and what Riverland has done for them.

John Ryther of Austin has been in the workforce ever since graduating high school. He worked trade jobs and made a successful life for himself.

Yet, getting a college degree was something he started thinking about and decided to take a leap of faith. Inspired by Ryther’s commitment to higher education, some of his children will be attending Riverland for their own educational pursuits.

“It’s hard to go back, and I’m in my 40s,” he said. “You wanna think that you have life all figured out. But, there’s a lot more you can offer through the challenges you face. That’s when you grow, and boy, have I.”

Friday was a momentous achievement for Ryther, who graduated with his associate degree in agricultural sciences. Soon, he will head to Mankato to work as an agricultural engineer. Using what he learned at Riverland, Ryther believes he’s well prepared for what lies ahead.

“Riverland is such a great school,” he said. “It’s really Austin’s hidden gem. Farming is nothing like it was in the past, and it’s becoming much more technical. It’s exciting to me. There are nine billion people in the world, and I’m not gonna let people go hungry. I’m looking forward to increasing our yields.”

Despite having gone back to school later in life, Ryther said it was never too late for people to take charge of their education and to take risks.

“People only regret things that they don’t do,” he said. “Be bold. Follow your dreams. We have to step out. The reward was so much more than I could ever have imagined.”

Originally in the nursing program, Keesha Pitchford, 38, of Austin, wasn’t sure about the career path she was going to take. Having done hair “all her life,” she decided to take a chance and instead pursue cosmetology. It was a decision she never regretted.

“We’ve done it,” Pitchford beamed. “I’m so excited about this new chapter. I always wanted to help people, and I thought this was another way of achieving that.”

It wasn’t the original trajectory the Riverland graduate had considered for herself. Yet she found herself employment at Great Clips in town, and has since been working with clients in making them feel confident and putting forth the best versions of themselves.

Pitchford truly feels she found her calling through the chance she took at Riverland. She hopes others will consider choosing a passion and following their dreams, regardless of how far along in life they are.

Anna Carmody, 20, of Mobridge, South Dakota, graduated with her massage therapy certification. Next year, she plans to finish her schooling to receive her degree in personal training and eventually pursue a career in becoming a sports massage therapist.

She also plans to play for Riverland Community College’s basketball and volleyball teams.

This type of career pursuit was one that Carmody never thought would be for her, but her instructors had inspired her to consider it as a future path.

“My instructors really drove me to consider sports massage,” she said. “I’m super excited. Next year, I’ll be ready to enter the job world.”

Carmody advises future students to not procrastinate on school work. She also said “never say never” and to keep an open mind for any possible opportunities.

“I never thought I’d be doing (sports massage),” Carmody said. “Don’t go in with having a closed mindset about anything. Keep an open mind and you can do anything.”