‘We come together through our art’ 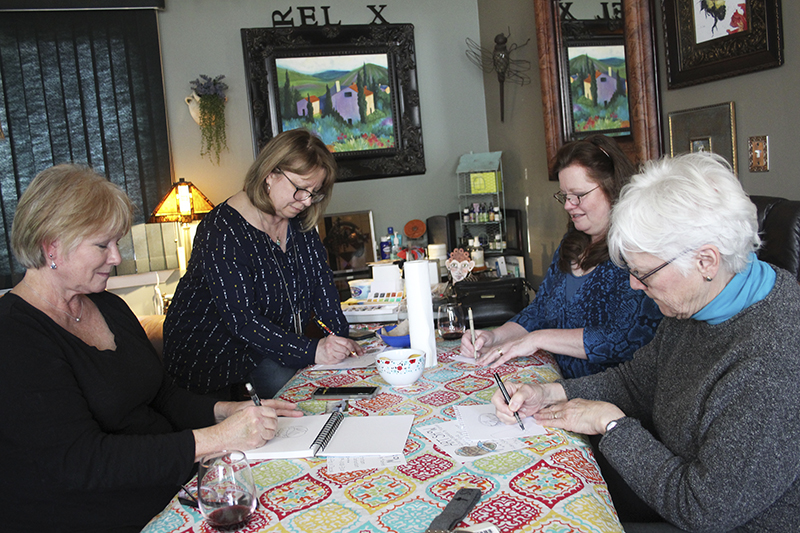 On Monday nights, a local massage therapist spreads a colorful tablecloth over her in-home massage table and invites her neighbors over to watercolor.

On May 10 and 11, The Color Wheel Gifts and Decor will host “Artists in the Hood,” a show that features work from each of the four artists. Peterson is an artist in residence at the store. The group has been meeting every Monday night to stay on track and focus on the show, Peterson said.

“It’s fun to have friends that are interested in doing art,” she said.

While each of the artists works in their own mediums, when they are together, they tend to do watercolor, Sorenson said.

She described her own style as free-flowing, using many different materials and affected by feeling.

“I tend to work fast because it’s just, it’s an inspirational thing for me,” Sorenson said. “My colors don’t come out exactly like everyone else sees it … I’m a little bit more wild.”

Hove is more of a realist, with photograph-like pencil drawings that tend towards pets and people.

When Hove watercolors, she said she likes to work with landscapes.

“Just the flow of the color that comes together when you, when you put it down on the paper, it’s so beautiful,” she said. 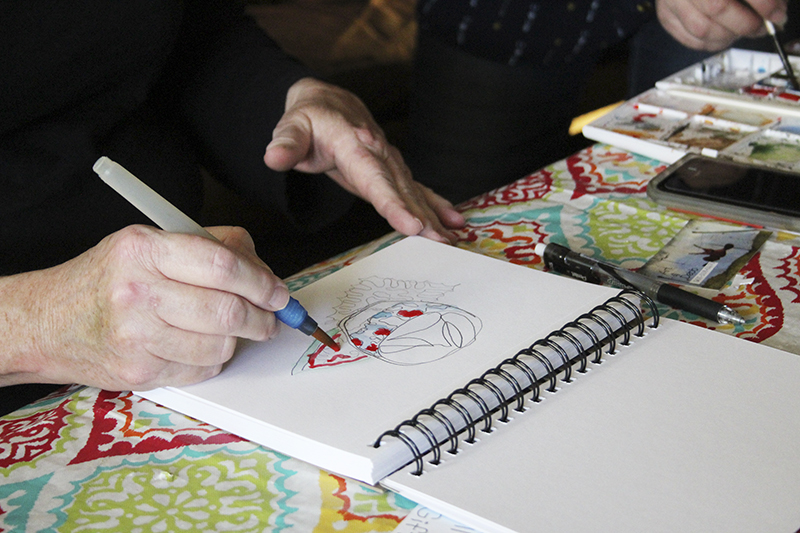 Pegi Sorenson moves on to the tablecloth as she works on her continuous line drawing of a fruit bowl. – Sarah Kocher/Albert Lea Tribune

Oliphant loves oil painting, but it is work to clean those brushes out. Colored pencils are more frequently employed, she said. She often uses them for still life work or for working from photos of things around town.

The women all live within a block of each other on Clark Street. Hove and Peterson are next-door neighbors. They would chat in their yard until Peterson mentioned she was an artist. Peterson became the first person Hove showed some of her own art to.

“She says, ‘You need to keep doing this,’” Hove said. “So she encouraged me and that was it. I was pulled right in.”

She said Peterson gave her permission to do more than what she already did. It expanded her work and made it more fun, she said. It was freeing.

Oliphant and Peterson have painted together for years after meeting at an Albert Lea Art Center — likely through a painting class, they said.

Sorenson is the newest addition. She named Peterson as the group’s catalyst. The two met when Sorenson went to Peterson’s house for a massage.

“I told her her house was like a hug,” Sorenson said.

She also couldn’t miss the art: It is all over the walls.

The contact with other artists spurs Oliphant on, she said. For Peterson, the group feeds her. To Hove, it brings energy.

Each of the artists have an A-frame rack of work on which to display their work, which is largely all for sale. On Monday, Peterson’s rack was ready and waiting in her living room, covered with towels so her fellow artists could not see what she had chosen.

“The reveal is Friday,” she said.

Sorenson said she hopes the Governor’s Fishing Opener will bring extra traffic to the show featuring the four neighbors. The show is 11 a.m. to 7 p.m. Friday and 11 a.m. to 3 p.m. Saturday at The Color Wheel.

“We are all different, but we come together with our art,” Peterson said.

What: “Artists in the Hood” show

Where: The Color Wheel Gifts and Decor, 122 W. Main St. in Albert Lea

How much: free to the public 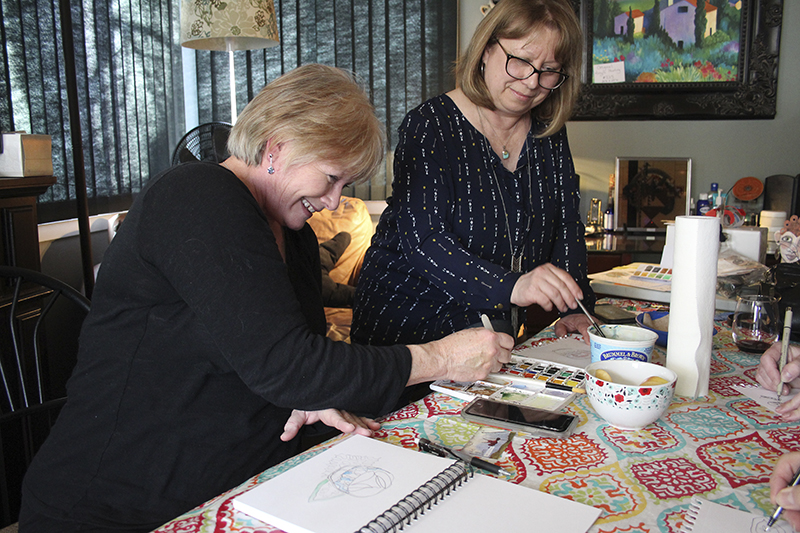 Pegi Sorenson, left, and Debb Peterson move on to watercolor to fill in more of their work Monday night. – Sarah Kocher/Albert Lea Tribune