‘We shouldn’t have had to fight this hard’ 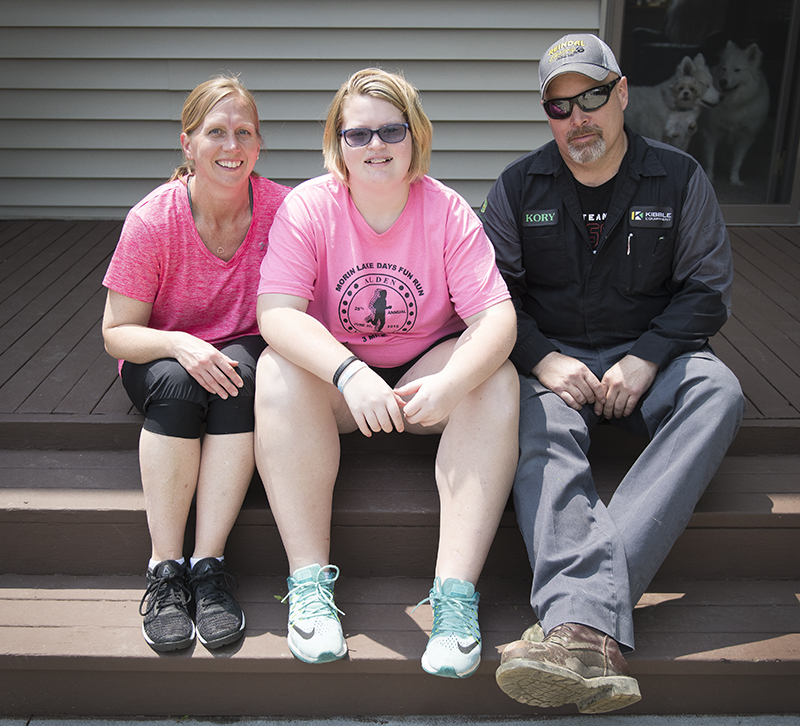 Amy and Kory Newman are pictured with their daughter, Alexa, center. The Newmans filed a special education state complaint with the Minnesota Department of Education in May. - Colleen Harrison/Albert Lea Tribune

ALDEN — Alden-Conger Public Schools is under investigation by the Minnesota Department of Education after parents raised concerns about their 18-year-old daughter graduating with her peers.

The parents asked the district not to graduate her.

Alexa Newman received special education services from Alden-Conger Public Schools since kindergarten. Legally, through a federal law called the Individuals with Disabilities Education Act, students with disabilities are eligible to continue receiving a free public education until they are 21 years old.

Parents Amy and Kory Newman filed a special education state complaint with the Minnesota Department of Education in May alleging the district violated IDEA and at times did not meet Alexa Newman’s individualized education program.

“It’s just unfortunate that you trust somebody … that they’re doing what’s best for your daughter and here to find out it’s like OK, they’re just going through the motions,” Kory Newman said.

According to a response written by Southern Minnesota Education Consortium Special Education Director Dan Armagost — the consortium serves seven districts, including Alden-Conger — submitted to the Minnesota Department of Education and provided to the Newmans (who provided the documentation to the Tribune), the district denies both complaint allegations.

Both Alden-Conger Superintendent Brian Shanks and Armagost said they could not comment on the state complaint as of press time, as the complaint is still under investigation by the Minnesota Department of Education.

‘We can’t trust them’

At an IEP meeting on Halloween, Alexa Newman was upset, Amy Newman said.

“‘I don’t think I’m ready to graduate,’” Amy Newman said her daughter told them. “‘Isn’t there something else I can do?’”

“My Special Education Director and Transition Program Coordinator said that because Alexa has been in our Next Step Transition Program for the past 3 years that she will need to graduate/earn her diploma on time with her peers,” the email said. “Here at the Alden School, our 18-21 program would be the same program I currently run. At this point, the 18-21 program was just one of the option that we had discussed at Alexa’s meeting, so according to SMEC (our Spec. Ed. Coop) if you are set on wanting Alexa to attend the Albert Lea program she would have to graduate with her peers here getting her diploma, and then you could open-enroll her in that program afterwards. Albert Lea is not in our coop. They feel that keeping her here another 1-3 years is going to do nothing but prolong the inevitable when it comes to her being so anxious, her skills, etc.”

Amy Newman said she was never informed that her student could continue to have services after her senior year of high school. It was Sue Draayer, vocational rehabilitation counselor with the Minnesota Department of Employment and Economic Development included in the email, who Amy Newman said called and told her what she now knows: if Alexa Newman were to receive her signed diploma, she would no longer be eligible to open-enroll to the 18-21 Transition program or anywhere else.

Draayer said she was not able to comment on the case.

The couple involved PACER, an advocacy coalition for parents of children with disabilities, and went through conciliation and mediation with SMEC, but Amy and Kory Newman said they could not agree with SMEC on what they wanted services to look like for their daughter.

“We can’t trust them, because they’ve lied to us,” he said.

The scope and sequence of what students do from grade to grade will look different between different students.

“When you look at the program, it’s individualized,” Armagost said.

This is why students who attend Alden-Conger could attend through age 21 in this same program.

“There’s nothing new that has to be done to change this from a kid that’s here at 17 years old to a kid that’s 18 to a kid that’s 20,” Armagost said. “When you look at it, the material, the teachers, the staff are here. The difference is going to be the work experience.”

Armagost said he sees this as a positive for students, as the program has more time with them to prepare for a smooth transition to life outside of school than if they started a new program at 18.

Amy Newman disagreed. Alexa Newman knows everyone in the school, she said. She’s comfortable in Alden, and staying in the same room with the same students and same staff would not provide her with new experiences.

“We want her in a program with other students that is separate from her high school,” she said. “… We want her around new challenges — new adventures.”

According to Armagost, it is common for special education students within the consortium to graduate at 18. It is harder to pinpoint a graduation age trend at Alden-Conger, where the program is three years old and started with younger students.

“The population you’re talking about hasn’t existed yet,” Armagost said.

County-offered services and other opportunities are available to students at 18 and 21, and what the program is aiming for is a smooth transition from school to work.

This can happen at 21, but it can also happen at 18, with students graduating in time with their peers, Armagost said.

In the Nov. 2 email, Cummings did mention a “plan/option” to do a work evaluation with Alexa Newman conducted by Draayer toward the end of the school year.

“We want our students with disabilities to have that same experience,” Kreutzbender said. “… It shouldn’t be locked into ‘just because you this lower-functioning skills, you have to stay in school.’”

A change in education

Since the parents and SMEC entered mediation, Kory Newman said the family has seen a change in their daughter’s education.

According to Armagost, all the program’s offerings have been in place since the beginning of the school year. Kreutzbender said trips to leave the classroom depend on a student’s individual needs, and there are no guidelines for how often those trips should occur.

“The Student’s transition needs were not only served, but the record reflects that she made progress,” the response said.

Her progress was also noted in response to the Newmans’ second allegation: that the district failed to ensure Alexa Newman was making progress toward her IEP.

Cummings was on a leave of absence from January to March, when she resigned.

“Alexa’s experience in school from 2017 until April, 2019 has been very unpredictable and very stressful as she had a teacher with multi-year attendance inconsistencies, therefore causing the special education students to be placed in other classrooms at times or have many different substitute teachers,” the Newmans wrote in their state complaint.

A lack of routine and structure can be overwhelming for students with special needs, Amy Newman said. Furthermore, during the times the teacher missed school, Amy Newman said Alexa Newman’s IEP was not met.

The response from the district, citing a progress report from March 25 said there was no evidence Alexa Newman failed to make progress.

“Instead, the reverse is true — the Student made meaningful progress both academically and in her other areas of transition need,” the response said.

The Minnesota Department of Education is currently investigating the complaint and will come to a decision July 1.

But for the Newmans, this situation reaches past July.

According to Armagost, parents are given a physical copy of their rights, including their right to contest an IEP, at each IEP meeting. Parents are required to sign a copy to prove they have received it.

Whether or not parents read it is another matter, he said.

Kory Newman said he took full responsibility for not being engaged in his daughter’s IEP from the time she was in kindergarten all the way through her education.

“I know more about special education now than I ever thought I would,” Kory Newman said. “I sat up at night reading.”

Amy Newman wondered how many children should have received services past 18 through SMEC and did not because their parents did not fight.

She said the couple is not filing a lawsuit. They have two younger children in the district. Now, they are looking ahead and behind at other families with students in special education. She said she wants other children to get what the law says they are entitled to: special education through age 21.

“We shouldn’t have had to fight this hard,” Amy Newman said. “… In our minds, too many have graduated, gotten their signed diploma and missed out on the opportunities.”

Alexa Newman did not receive a signed diploma and will open-enroll to the 18-21 Transition program in Albert Lea in the fall, Amy Newman said.

Whether the Department of Education rules in favor of the Newmans or not, Kory Newman said he expects the state to keep a closer eye on Alden-Conger in the future.

“The only thing this is going to benefit, hopefully, is the kids coming up,” Kory Newman said. “It’s too late for Alexa.”