Wilbur Charles Kraft, 97, was born Nov. 30, 1921, at home in Dexter to William Jacob and Ethel Wighann Kraft. He passed away Thursday, May 2, 2019, at Sanford Bemidji Hospital following a surgical procedure. 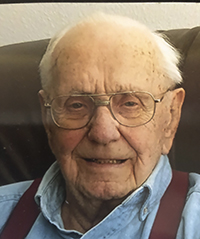 Wilbur was raised and educated in Dexter. As a young man he farmed with his parents, using teams of Percheron and Belgium draft horses and working with two-, three- and five-horse hitches.

In 1942 Wilbur was drafted into the U.S. Army. His basic training was done at Fort Barkley, Texas.  After its completion, he was transferred to Camp Roberts, California, where he worked with a hospital surgery unit. In July 1943, he boarded a British hospital ship with the 77th Station Hospital and sailed to Norwich, England, avoiding many enemy ships during the crossing.  Following the Battle of the Bulge, Wilbur was transferred to the 845 Truck Master Co.  His duties included transporting ammunition, gasoline and supplies. Much of this was done at night during blackout conditions. At times his duties included transporting wounded and deceased soldiers. Wilbur was honorably discharged from the Army on Nov. 10, 1945. He made many lasting friendships with men from different parts of the U.S. during his time in the Army, remaining in contact and occasionally visiting them long after their service had ended.

Upon returning to civilian life, Wilbur worked briefly for Hormel Foods in Austin and for a streetcar company in Minneapolis. In 1947 he began working for Wilson & Co. in Albert Lea, retiring in 1979.

On Dec. 14, 1946, he married Janet Miller. Together they had two daughters, before divorcing in 1958. On Aug. 28, 1964, he married Leona Quint. They were married until her passing in 1990. Wilbur and Leona enjoyed traveling in their motorhome, visiting friends and family, enjoying bluegrass and ethnic festivals and steam engine tractor shows. From 1980 until 2003, winters were spent in Harlingen, Texas.

At the age of 86, Wilbur made the decision to move to Bemidji to be close to daughter, Connie, her children and their growing families. In Bemidji Wilbur quickly made many friends. He had many regular card games, and loved to visit with anyone who crossed his path. His incredible memory and easy manner made for an engaging conversation. Wilbur was also an avid reader and keen investor with an intellect that belied his basic education.

A celebration of life coffee will be take place at 2 p.m. Thursday at Birch Haven Assisted Living Apartments for his Bemidji friends. Funeral services will be at 11 a.m. Saturday at Clasen-Jordan Mortuary. The Rev. Liz Erickson will officiate. Interment will be in Oakwood Cemetery with Veterans of Foreign Wars Olaf B. Damm Post No. 1216 and American Legion Austin Post No. 91 in charge of military rites. Visitation will begin one hour prior to the service.