Celebration of life services for William Logan Bankester of New Richland will be at 10:30 a.m. May 25 at Bonnerup Funeral Service in Albert Lea. Visitation will be one hour prior to the service. Private family interment will be in Hollandale Cemetery. Military honors will be accorded by Albert Lea area veterans groups.

William was welcomed into the kingdom of heaven Saturday, May 4, 2019, from New Richland Care Center in New Richland. He was 96. 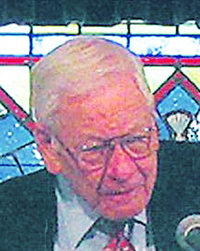 William was born Aug. 28, 1922, in DeQuincy, Louisiana, the son of Warren and Hasseltine (Duck) Bankester. He lived his early life in Reeves, Louisiana, the youngest of five children. William left Louisiana at the age of 18 to go to Moody Bible Institute in Chicago, where he met Alice Saha. They married in 1943. Together they had three children, David, Anita and Philip. His education was interrupted by World War Il, when he enlisted in the U.S. Navy. He served until the end of the war. He spent two years in the South Pacific.

After returning from the war, he returned to Chicago and graduated from Moody and Wheaton College and Seminary. Upon graduation from Wheaton in 1952, William accepted a call to serve at Conservative Congregational Church in Hollandale, where he served as pastor for 20 years. In 1972 they moved to Freeport, Illinois, serving at Zion Church for 20 years. In 1993, they moved to Mazeppa for one year at Woodville Chapel before returning to the Hollandale church for another 20 years. His final six years were spent as a resident of New Richland Care Center, but he continued to minister there to staff and residents.

William is survived by his children Anita (Jim) Reagan of Apple Valley, David (Jane) Bankester of Puyallup, Washington, and Phil (Dorene) Bankester of Carbondale, Illinois. There are also 10 grandchildren, 18 great-grandchildren and numerous nieces and nephews.

He was preceded in death by his parents; wife, Alice, of 72 years, in 2016; three sisters and one brother.