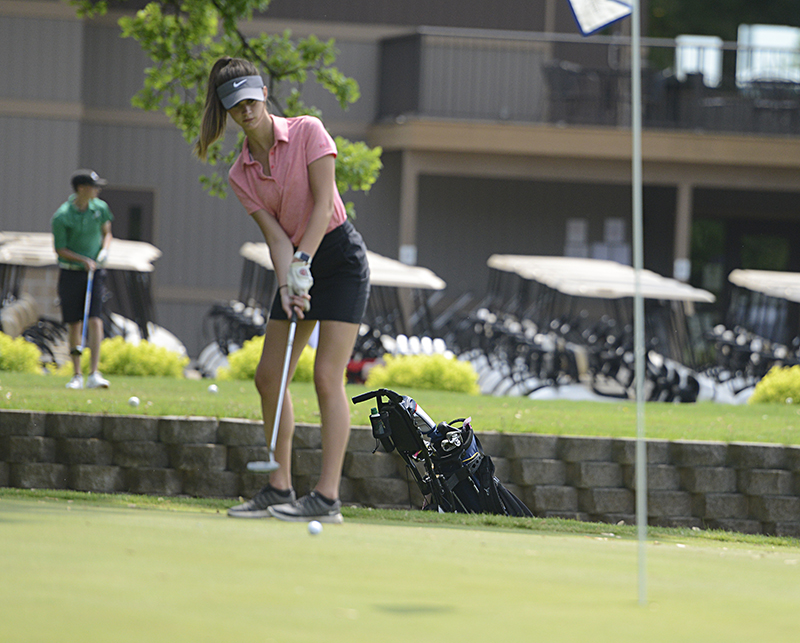 Albert Lea sophomore Grace Nelson watches her putt on hole No. 9 Monday at the second day of the Section 2AA golf meet. Nelson shot a 125 on the day as the Tigers missed out on sending the team to state. - Tyler Julson/Albert Lea Tribune

A number of area golfers were still alive Monday afternoon in their respective section tournaments with a chance to make the state meet.

With three schools and one individual still in the hunt, just Alden-Conger’s Annika Riebe and United South Central’s Andrew Heggen emerged with a state berth.

In the Section 2AA tournament at New Prague Golf Course, the entire Albert Lea girls’ team was still in contention, along with the lone competitor from the boys’ team, Tucker McKinney.

The best finish for the girls’ Tigers team was senior Charley Fleek, finishing her second round with a +24 and an overall score of +46. Fleek missed an opportunity at state by two placings. Whitney Mullenbach was close behind with a 14th-place finish with a final score of +56. Alyssa Jensen came in 17th place (+59), Makenzie Herr came in 22nd place (+76) and Grace Nelson came in 26th place (+118).

Freshman Tucker McKiney had a tremendous first round Friday, shooting a 79 and putting him well within contention of earning a trip to the state meet. However, a second round of 89 landed him in a tie for 17th place, missing out on advancing by 10 places and 12 strokes.

The Section 2A meet in Mankato yielded a little more success as both the Alden-Conger girls’ team and the United South Central boys’ team competed in the second round.

The Rebels had the same sort of luck in the boys’ half of the tournament. Andrew Heggen finished in a tie for second place with an overall score of +14, just two strokes behind the winner to earn him a spot in the state tournament.

Riebe and Heggen will both compete in the Class A state tournament starting Tuesday at Pebble Creek Golf Course in Becker.