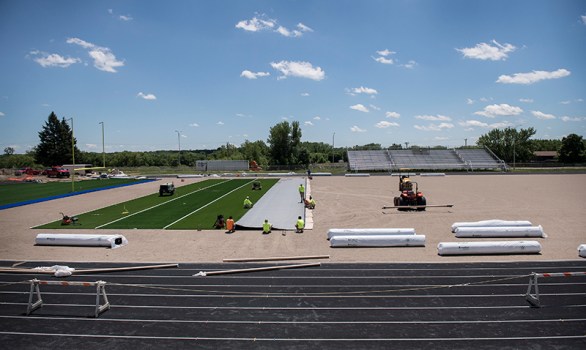 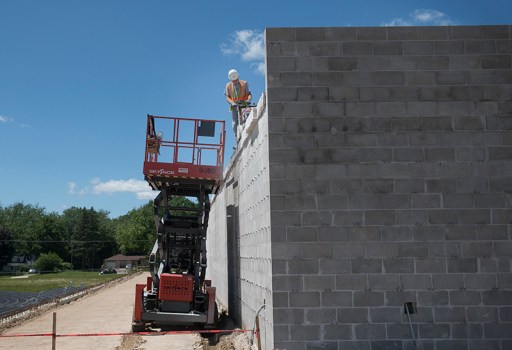 While rain has affected work at Hammer Complex, both the project manager and director of facilities say Sept. 3 is still the goal for the Albert Lea Tigers’ first home football game on a new Hammer Field. - Colleen Harrison/Albert Lea Tribune 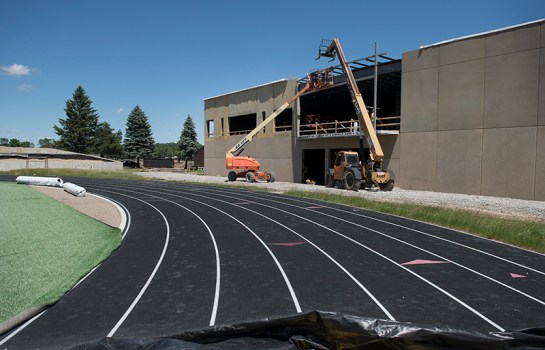 “We’re not focusing on the field house because we know we can’t get it done,” Steve Anderson said. “... We’re really trying to get the grandstand and get everything done for the games.” - Colleen Harrison/Albert Lea Tribune 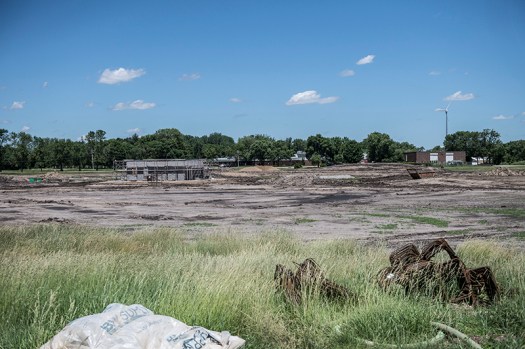 Rain has been a challenge for school construction projects

While rain has affected work at Hammer Complex, both the project manager and director of facilities say Sept. 3 is still the goal for the Albert Lea Tigers’ first home football game on a new Hammer Field.

“The constant rainfall has really been a challenge,” said Jeff Ryks, project manager with The Joseph Co. The company is handling construction at Hammer Complex excluding turf installation.

Ryks estimated the rain has cost them a couple weeks of progress from where he was hoping to be, but said overall, the project is still going OK.

Rain has been the biggest challenge for the softball, baseball and soccer fields, Ryks and Albert Lea Area Schools Director of Facilities Steve Anderson said.

“They’ve been a disaster,” Ryks said. “That’s where the rain has probably hurt the most.”

There is currently no drainage in these fields and the soil is poor, so the rain saturates the area and makes it difficult to get vehicles out there to work.

Anderson said the goal is to have the softball, baseball and soccer fields seeded in the fall and ready for play next fall.

But the baseball and softball concession stands walls are up, Anderson said, and five of the eight dugouts have had their foundations poured, Ryks said. Additionally, the varsity softball infield is being prepped for artificial turf work, which will begin after the football field is done.

Artificial turf work began on the football field at the end of last week. The process will likely take two weeks, Anderson said.

Footings have also been poured for the ticket boxes. Anderson said the grandstand first floor is “basically up.” Ryks estimated the grandstands are about 35% complete.

Much of what is left is concrete work in the plaza and entrance area, Anderson said. Ryks estimated they would start pouring concrete for the plaza in about two weeks.

The fieldhouse is closer to 40% complete, Ryks said. However, Anderson said the fieldhouse has taken a back burner to completing the grandstands ahead of game time.

“We’re not focusing on the field house because we know we can’t get it done,” Anderson said. “… We’re really trying to get the grandstand and get everything done for the games.”

Work also continues at Halverson Elementary School, where the footings and foundation for the new gym and front office have been poured.

“By this time next week … the gym walls will be up,” Anderson said.

The new gym is more than double the square footage of the former gym, which is being expanded to the west and north to accommodate both the gym expansion and the office. The special education classroom previously located at the front of the building will now be moved deeper into the building to the east side of the gym. The restrooms near the gym will be expanded to hold multiple stalls, and the former office area will be used as individual office space, Anderson said.

The school will also have walls and doors put in some hallways that allow most of the school to be blocked off at night during community events in the gym.

Anderson anticipated the pool locker rooms at Albert Lea High School will be done at the end of July. They are being painted, and next week Anderson said the hope is for the flooring to be done. After lockers and doors are put in, the rooms will be done.