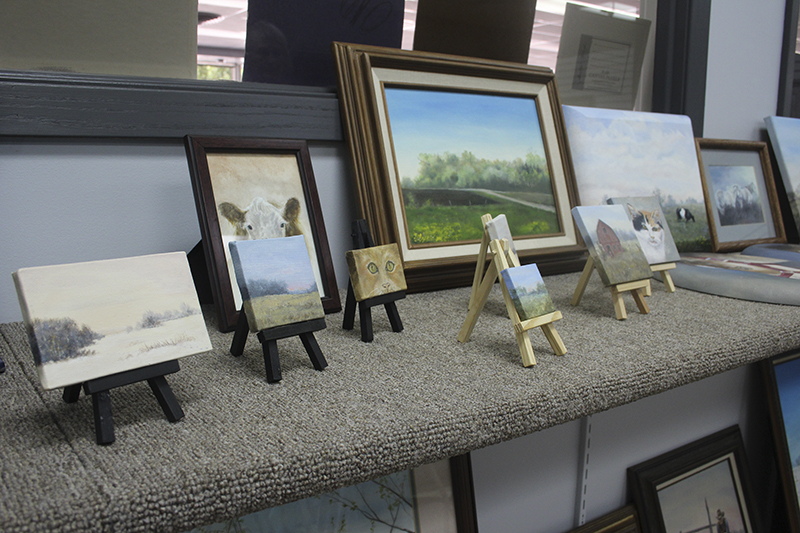 What started at her mother’s table will now be on the walls of The Albert Lea Art Center starting this week.

Artist Tammy Schneider of Waltham will display a retrospective of her works beginning Sunday at the Art Center. Her works are largely acrylic paintings, though she does some oil paintings, graphite drawings and watercolor.

In addition to miniatures and prints, the show will include approximately 40 pieces created beginning in the 1980s. Most of the pieces for the show came from her own home.

“I don’t need wallpaper,” Schneider said. “All I’ve got is paintings.”

Her work focuses on themes related to animals, especially horses and dogs, or life in the rural Midwest. 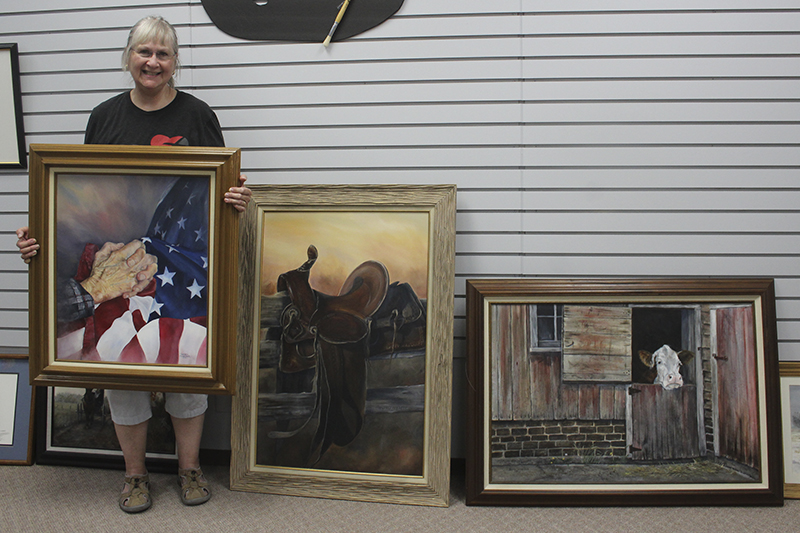 Tammy Schneider’s retrospective show will include approximately 40 pieces, in addition to miniatures and prints, and spans her work from the 1980s until now. Sarah Kocher/Albert Lea Tribune

“It’s what I grew up with,” Schneider said.

She lived on a farm and loved animals, which were present on that farm. Schneider also extends her love of animals to commissioned pet portraits. Most of her work comes from photos she has taken or ideas seen in magazines she amends and reworks.

One painting shows a Manchester farmer, wearing a yellow seed cap and blue jean overalls, backed by pink-tinged clouds as she stares out of frame. The painting was grand champion at a county fair a few years back, Schneider said.

Another is a rendering of her father’s hands folded over an American flag — also an award-winning painting. A painting of two belted cows grazing in a field was reserve grand champion at a county fair. She tries to have a new piece done just for the fair, she said.

Schneider’s mother had no formal training, but still was an artist and taught her daughter, who would paint and draw at the table. Her mother was a great influence on her painting, Schneider said. Their art is a gift, she said.

Over the course of the years, her work has changed. It is not necessarily a change in style, Schneider said, but sometimes age and trying different techniques can provide different outcomes as time moves forward.

She said her work may also be affected by the time she is able to devote to her work. What used to be a few hours a day is now a few hours a week, Schneider said, as she cares for her husband. It is the same husband who, in one of her pieces, walks toward the foreground of the piece and away from the barn with their dog, Sam. A cow, standing guard above her calf, peers at the pair around the figure of a dead tree.

It is not as much time as she would like it to be, but Schneider keeps painting. It relieves stress, she said, and takes her into a different world.

“It’s a part of me,” Schneider said. “It’s what I do. I feel kind of empty when I’m not working on something.”

Instead, she works on several pieces at once. When she tires of working on one, she can move to another. Doing so allows her to think through her choices and improve her paintings, she said.

This is the case for the Amish gentleman peering around the head of a horse to drive his black buggy down the road. Schneider said she changed this painting several times before she was happy with it. A tree, ablaze in vibrant fall oranges, is home to the finishing touch: a squirrel.

In addition to displaying her pieces, the gallery opening will also feature Schneider’s music. She will play the accordion at the open house, which is from 1 to 3 p.m. Sunday.

How much: free to the public