Funeral services for Brad Whelan will be at 3 p.m. Sunday at Grand Meadow Lutheran Church in Grand Meadow. The Rev. Megan Reedstrom will officiate. Visitation will be from 1 p.m. until the time of service at the church. 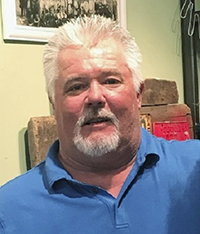 He was born Aug. 2, 1959, the son of Thomas and Shirley (Lawrence) Whelan in Albert Lea. At a young age the family moved to the Alden area, where he attended school. Brad was a member of the football, wrestling and track teams at Alden-Conger High School. He graduated in 1977.

He was married to Diane Stillings and had two children, Katie and Nick. They later divorced. Brad was working on the new school in Grand Meadow through Lindquist Construction when he met Lisa, the love of his life. The two married Aug. 21, 2004, in Grand Meadow. Brad was employed at Pyramid Transportation at the time of his death.

Brad and Lisa raised their five children together. As a family they enjoyed fishing, camping and hanging out at the farm. Brad was an avid fisherman, enjoyed solving Wheel of Fortune puzzles with Lisa and Friday Night Fun Night. Brad loved his family and was especially fond of his 12 grandchildren, who always enjoyed his Donald Duck impression. Brad was the rock to his siblings, always keeping his family close. He would share stories with his siblings at family gatherings to keep the memories alive. He will always be known as “the storyteller.”

Brad and Lisa enjoyed fishing, doing yard work together and had plans to travel more. Brad will be greatly missed by his family and friends. He will never be forgotten.

He was preceded in death by his parents; brother, Randy Whelan; nephew, Landon Corson; and father-in-law, David Lorenzen.

Condolences may be left at www.Hindtfuneralhomes.com.