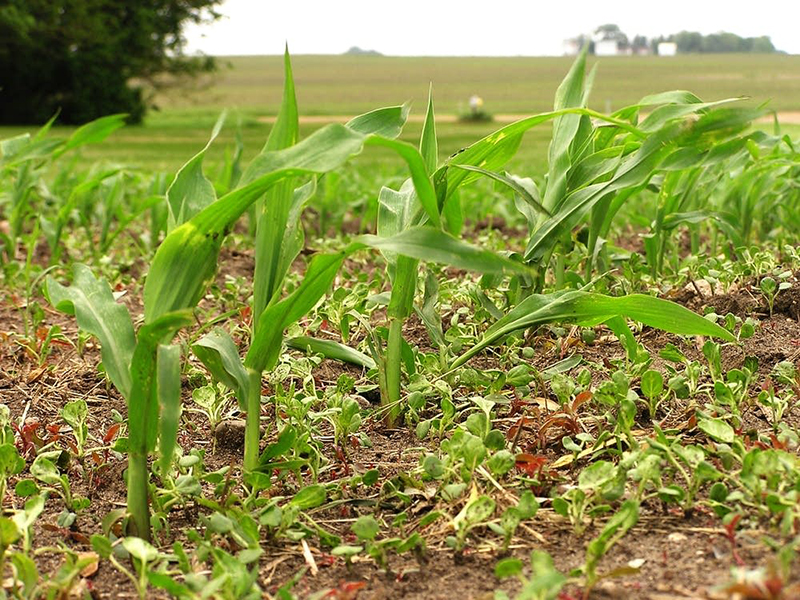 Corn plants on a farm in Jackson County are about 4 inches tall. Rising prices for corn and soybeans could bring relief for financially struggling crop farmers. - Mark Steil/MPR News

Corn and soybean prices are rising as a result of wet conditions that delayed spring planting in much of the Midwest, creating uncertainty about this year’s harvest. The situation may be propitious for Minnesota crop farmers because they’ve been able to plant.

The U.S. Department of Agriculture’s National Agricultural Statistics Service says 99 percent of Minnesota’s anticipated corn crop is in the ground, and nearly 90 percent has emerged — about two weeks later than a normal year. Soybean planting was also running about two weeks late, although oats, spring wheat, barley and other beans were less than a week behind.

Significant rainfall has made for good topsoil moisture throughout Minnesota, as precipitation has topped half an inch for the week over most of the state, though there’s been too much rain in some places.

On the other hand, flooding has impeded planting in many other breadbasket states. The USDA said this week plantings in other states are down significantly, and that wet weather has slowed planting across the country to its latest in more than 40 years.

The prospect of a relatively small national harvest is helping boost corn and soybean prices to levels not seen in several financially challenging years in farm country.

Some farmers who stored grain, waiting and hoping for higher prices, may see an opportunity to sell it and cash in, said Kent Thiesse, a farm management analyst with MinnStar Bank. But maximizing the opportunity is a challenging bet, he said.

“Are we nearing the top of the market or is this market going to keep going? And you don’t want to lose out on maybe the best marketing opportunity we’ve had in a long time to capture some of those profits,” Thiesse said.

Some farmers may want to sell this year’s crop in advance — before harvest — to lock in profits from rising prices, but that too is a gamble, Thiesse said.

“They’d like to take advantage of these prices — the best corn prices we’ve had in over five years,” he said. “But until they have a little more certainty on the production it’s hard to do a lot of forward pricing on the crop.”

Thiesse said crop prices driven by weather conditions tend to rise quickly and then slowly fall over an extended time.

While higher prices are good for crop farmers, Thiesse said they will cut into profits for livestock and dairy farmers who use corn or soybeans as feed. The dairy industry also has weathered years of low prices for milk. Higher corn prices will also squeeze profit margins for ethanol plants that turn corn in to fuel.

Thiesse said how well crops grow over the next few weeks will strongly influence grain prices.