Funeral services for David Emmett Poole of Albert Lea will be at 11 a.m. Friday at Trinity Lutheran Church in Albert Lea. The Rev. Eileen Woyen will officiate. Visitation will be from 4 to 7 p.m. Thursday and one hour prior to the service at the church. Interment will be in Hillcrest Cemetery. 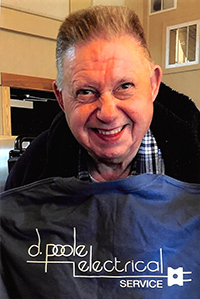 David died Saturday, June 8, 2019, at St. Marys Hospital in Rochester surrounded by his loving family. He was 80.

David was born Oct. 6, 1938, in Albert Lea, the son of Albert and Luella (Nielsen) Poole. He graduated from Albert Lea High School in 1957 and was united in marriage to Shirley Selle on June 14, 1959, at Trinity Lutheran Church in Albert Lea. David was an Albert Lea resident all of his life and worked as an electrician at Gordon Electric, Schammel Electric and Hicks Electric before starting Poole Electric and Bike Shop in 1969. He had been president of Electrical Union No. 949 and the Southside Businessmen’s Association.

David loved to tinker and was always busy working with bikes, electrical, fire extinguishers and his can recycling business. He also enjoyed his cigars, having coffee with his buddies and playing squirrel card game.

David was preceded in death by his parents; brother, Dick; sisters Katherine, Myrna and a sister in infancy; and nephew, Gene.

His family would like to thank all who supported Dave in his many years of providing service to the area with repairing bikes, motors and electrical issues. He will be greatly missed by all, especially his family! A special thanks also to all the people who assisted at MarketPlace, Mayo Clinic Health System in Albert Lea emergency room doctors and staff, Mayo Clinic flight crew, Mayo Clinic Cardiac Intensive Care Unit doctors and staff.

“We can’t thank you enough for the special care you gave David,” his family stated.