Derek Lars Huston, 40, of Wells passed away unexpectedly Friday, June 14, 2019, at his home in rural Wells. A memorial service will be at 11 a.m. Saturday at Bruss-Heitner Funeral Home in Wells. Brandon Huston will officiate. Visitation will be two hours prior to the service at the funeral home Saturday. There will be a luncheon following the service at Wells Community Center. Visit www.brussheitner.com to leave an online condolence. Bruss-Heitner Funeral Home in Wells is in charge of arrangements. 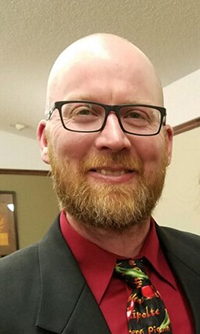 Known as Derek to some and “Lars” to many, he was born to John and Laurie (Hummer) Huston on Oct. 2, 1978, in Wells. He attended Wells-Easton Elementary School and graduated from United South Central High School in Wells in 1997. He acquired the nickname “Ducky” during his younger school years and it carried throughout his lifetime.

He met the love of his life, Jessica, in 2004 and the two were married in 2006 in Albert Lea. Yes, he married the boss’s daughter. They have one son, Kyler Lars Huston.

Derek managed to survive cancer not once, but several times. He underwent lesion removal on his scalp in 2007, and had a large mass surgically removed from his brain in 2014, followed by several radiation treatments and a year and a half of chemo/immunotherapy. Another area in his brain was brought under surveillance in 2019, along with a failing kidney. Although his body was betraying him with aches and pains, he never complained as he didn’t want to burden others with his problems.

Derek was a man of few words, but many facial expressions. The better you knew him the more you were able to tell exactly what he meant without him uttering a word. Although he wasn’t a big conversationalist, his emotions ran deep. Derek wasn’t always as serious as he seemed, either. He liked to have fun and was seen a time or two doing the “robotic turkey” — also known as the funky chicken dance — at weddings, goofing around at work racing to the top of the corn pile and nobody can forget his infamous one-liners. Periodically he did have a cranky streak — most often when someone ate his food or you tried taking his socks off when he was napping.  However, he was most well-known for his quick wit, sarcasm, infectious laugh, honest smile and his loyalty.

He was also well known for his ability to fix anything and tackle any project just by looking at a diagram or watching a video. He was also a master driver, able to get behind the wheel of just about any vehicle and drive it like he’d owned it for years. If you ever had the chance to watch him run a bobcat when picking up the corn pile at the Alden Elevator, it was ballet for heavy equipment. He and Brian would scoop corn simultaneously without crashing and in an almost choreographed fashion. He also did a fantastic job farming and had a real love for the earth. One could definitely say that farming was in his blood. He farmed with his father, John, and son, Kyler, until John passed away in August 2018. They were more than father and son, son and father. They were close friends. Derek, John and Kyler also loved to hunt raccoons and deer together in the fall. The trio took a trip to South Dakota to hunt prairie dogs a few years back and discovered rattlesnake does taste like chicken.

Derek also enjoyed working for Northern Country Co-op. in Alden. He managed the shop, was a chemical applicator and general jack of all trades. More recently, he was also working on taking over his father’s tree service business. He enjoyed working outdoors and staying busy. Derek was one of the hardest workers you could’ve ever met, whether it was at his job his home or his family. If he couldn’t figure something out, then one could honestly say, “Huston, we have a problem.”

Derek tried to live by Bible principles and was baptized as one of Jehovah’s Witnesses in 2006. The one hope that he longed to see fulfilled was the resurrection because the wanted to see his father again.

Derek Lars Huston will always be loved and missed by all who knew him.

“He will live on in our hearts and through our precious memories of him. Although we will never know the reason he chose to end his life, it matters not as we choose to honor the man that Derek was and will forever be in our hearts,” his family said.