Living in the present 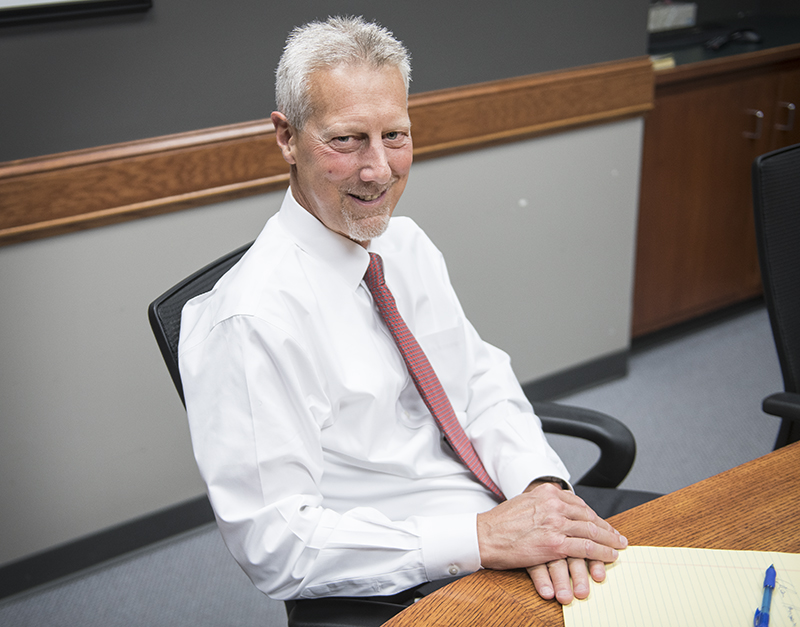 Lawyer to share his cancer story in upcoming Relay for Life

That’s what Doug Peterson has gained since his cancer diagnosis.

A few years ago, Peterson sat down and his back went out. After it had healed he wanted to work on staying “on top of it,” and went to HealthReach, where he had gone before to treat sports-related injuries. While there a doctor suggested getting an X-ray of his lower spine for a baseline, and a spot was noticed. After some tests, he would be diagnosed with advanced prostate cancer in June 2017.

Peterson, now 59, said he hadn’t noticed any symptoms, and there was little history of cancer in his family, and no history of prostate cancer. The initial shock, disbelief and “fear of the unknown” hit Peterson and his family, before they surrounded him with support.

Peterson said he started chemotherapy a month later, and would go through six treatments. In December 2017, he would start an out-of-the-ordinary medication regimen at the suggestion of his doctors at Mayo Clinic in Rochester. The medication he was prescribed is typically given to patients toward the end of treatment, whereas he was getting it much earlier, he said.

Peterson would then go in for blood tests every four months to test his PSA levels — his prostate specific antigens — which show if the cancer was active and how active it was.

Since April 2018, those tests have been unable to detect any of the cancer cells, meaning Peterson has been in remission. He is still on the medication for the time being, and is unsure when that may change in the future, as the medical protocol he is on is somewhat unprecedented.

While some might credit the chemo and medication for Peterson’s success, he thinks that’s only part of the story.

When he heard his diagnosis, Peterson changed his ways. While he considered himself fairly healthy before his cancer diagnosis, he changed his diet and has focused more on nutrition. He said he wasn’t always the best about getting the right amount of fruits and vegetables, and now he probably has 15 to 20 servings a day. He switched to a plant-based diet, and cut out dairy and meat, with the exception of fish. He started seeing a nutritionist, who helped him choose vitamins and supplements to aid in his fight against cancer. He has made sure to exercise daily, and work toward having a positive mindset.

“I think when you fight cancer, and when I say fight, I really refer to it more as healing cancer — that’s the way I look at it,” he said. “I think it’s important to have the right attitude. You know, everyone talks about having a positive attitude, which is sometimes a lot easier said than done.”

The things Peterson focused on to improve his attitude were exercise — for both his body and mind, reading positive material such as people who are in remission or are currently healing cancer or spiritual books, having a strong faith, getting into meditation and seeing an energy worker to work on relaxation techniques.

“I’m doing quite a bit outside of just the medical response,” he said.

At the time of his diagnosis, Peterson, an attorney for 35 years, said he didn’t have enough balance between his work and his life outside of work.

“I was working way too much,” he said. “I didn’t have the proper balance in life, and so, that, I believe, contributed to the cancer.”

Through his experiences, Peterson said he has learned to become more present.

“In work and in life, we get on a treadmill, and it’s sort of the same thing day after day,” he said. “Things have become much more vivid to me, and I’m trying to live much more in the present, which means I actually enjoy things a lot more.”

Peterson believes it was his lifestyle and diet that contributed to his diagnosis, especially due to his clear family history and that he was 57 when he was diagnosed — regular prostate screenings aren’t typically recommended until 60.

On top of his multiple regimens used to fight his cancer, Peterson said he relied on the support of his friends and family — wife, Jill; three adult children, Corbyn, Connor and Lucas; and two grandchildren.

Through his own cancer journey, Peterson has come out the other side with advice for others facing something similar.

“Focus on your entire well-being — your mind and your body — and do everything you can to be positive,” he said. “Create an environment in your body that’s conducive to healing and to boosting the immune system.”

Peterson was asked in April to be an honorary speaker for American Cancer Society’s upcoming Freeborn County Relay for Life. He will speak at the event, which is from 5 to 11 p.m. June 21 along North Broadway Avenue in downtown Albert Lea.

“My hope is simply if there’s one person and one thing I can say that helps that one person or gives that person some idea of how to approach their healing process, it’s a success.”