Funeral services for Muriel R. Gries will be at 10:30 a.m. Thursday at Concordia Bear Lake Lutheran Church in rural Albert Lea. The Rev. Daphne Hamborg will officiate. Burial will follow in Bear Lake Cemetery. Visitation will be from 4 to 7 p.m. Wednesday at Bonnerup Funeral Service in Albert Lea and again one hour prior to the service at the church. 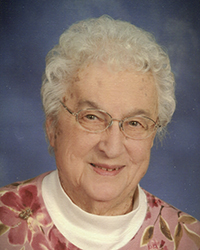 Muriel died how she lived her life, surrounded by her family, Sunday, June 23, 2019, at St. John’s Lutheran Community in Albert Lea. She was 91.

Muriel Rosella (Klukow) was born Sept. 21, 1927, in Albert Lea to Frank and Ella (Nasen) Klukow. She attended country school and then graduated from Albert Lea High School in 1945. On June 30, 1946, she was united in marriage to Walter Wichmann. Together, they raised four children. Walter passed away in 1978.

In 1980, Muriel married Donald Gries and would make their home in Geneva until Don’s death in 1987. She then relocated to Albert Lea, where she lived the remainder of her life.

Muriel was a devout Christian, always having the Lord at the center of her life. She was baptized, confirmed and married at Concordia Bear Lake Lutheran Church. She was a member of WELCA and the Ruth Circle, and taught Sunday school for many years. She was also a member of the Conger Mother’s Club and a 4-H leader when her children were growing up. Muriel enjoyed gardening, going out for coffee and was an excellent cook. Cinnamon rolls were her specialty! She enjoyed going with her family to Branson, Missouri.

Muriel always had an open-door policy; everyone was welcomed on the farm, and there was always a pot of coffee on the stove. Above all, Muriel loved her family more than anything else. Any moment spent with her children, grandchildren or great-grandchildren was when Muriel was happiest.

The family would like to thank staff members at Oak Park Place, The Meadows of St. John’s, and Sheltering Arms at St. John’s Lutheran Community for their wonderful care and attention shown toward Muriel.

Blessed be her memory. She was a blessing to all who knew her!