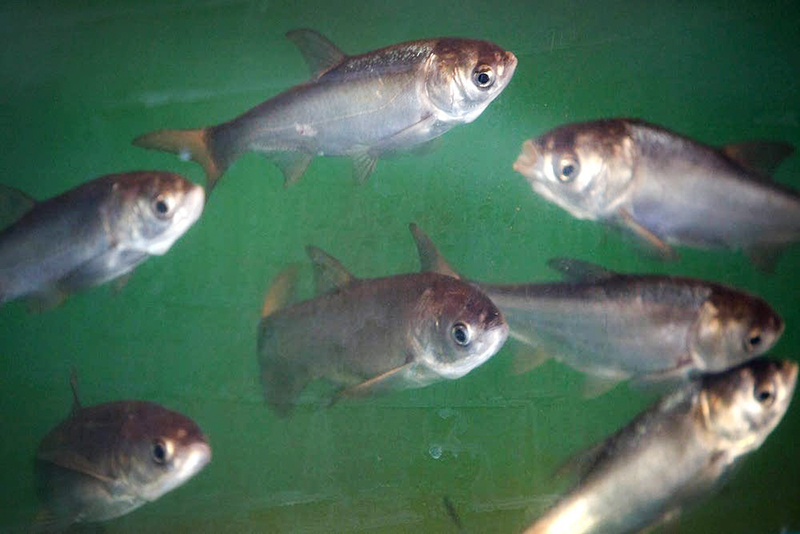 Pictured are silver carp in a tank in April 2013 at Minnesota Aquatic Invasive Species Research Center on the University of Minnesota-St. Paul campus. - Jennifer Simonson/MPR News

Four invasive carp were found in southeastern Minnesota rivers this month, and the state Department of Natural Resources says this spring’s flooding and high water could have eased their journey upstream.

One bighead carp was captured in the St. Croix River in Oak Park Heights, and three silver carp were caught in Pool 4 of the Mississippi River farther south, between Red Wing and Wabasha.

It’s not unusual for the DNR to find invasive carp in Minnesota rivers. On average, between two and seven are caught every spring, said Nick Frohnauer, the DNR’s invasive fish coordinator.

“The one unusual aspect is that we’ve seen more silver carp in a short span of time than we have in past years,” he said.

Frohnauer said this spring’s persistent high water in southern Minnesota, Illinois and Iowa could have played a role in the fish’s movement upstream.

In normal years, navigational locks and dams play a significant role in slowing the movement of carp upstream. It’s difficult for fish to get over the gates that control the water’s flow.

But during flooding season — which lasted several weeks this spring — those gates are lifted to let more water through, creating what’s known as an “open river” condition. The river’s velocity slows down, allowing fish to move upstream unimpeded, Frohnauer said.

The fish were brought to the United States in the 1970s as a means to control algae in fish farms in the South. They escaped into the Mississippi River and have been making their way upstream ever since.

Invasive carp have spread throughout the Mississippi, Ohio, Missouri and Illinois rivers and their tributaries. They are voracious eaters and pose an ecological threat to rivers and lakes by crowding out native fish species.

Researchers and environmental officials are concerned that the invasive fish could continue to move northward, perhaps eventually into the Great Lakes.

But in Minnesota, the DNR has found no indication that invasive carp have established, breeding populations in Minnesota, Frohnauer said. For now, researchers keep track of the invasives as they’re found in Minnesota’s waters.

The DNR has run an extensive monitoring program for invasive carp for the past seven years. Researchers sample Minnesota rivers for all ages of carp, but have only found adults — never any eggs, larvae or juveniles.