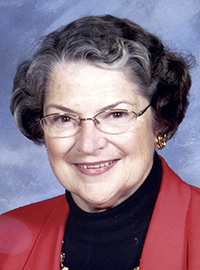 Pat was born Aug. 22, 1935, in Minneapolis to Patrick and Teresa (Culhane) Dunn. She grew up in Edina, attended Christ the King School and was a proud graduate of Holy Angels Academy. Pat attended the University of Minnesota and received degrees in home economics and elementary education; she later earned a master’s degree in education. She was an active member of Kappa Alpha Theta Sorority.

Pat enjoyed teaching and taught in Bloomington and San Francisco.

Pat married Harold Waters on Aug. 10, 1963, at Christ the King Church in Minneapolis. They moved to Albert Lea, where Pat taught at the Manchester one-room school. After their first daughter, Teresa, was born, they moved to Edina and had three additional girls: Margaret, Mary and Patty. Later they returned to Albert Lea where she taught generations of children at Lakeview, Clarks Grove and Sibley Elementary schools. After retiring from teaching, Pat volunteered at St. Theodore Catholic School.

Pat was very involved with the Knights of Columbus Auxiliary, St. Theodore Catholic Church and the American Legion Auxiliary. She was always ready to entertain and welcomed all to their home. Family and friends were very important to Pat as she was an only child. She considered her cousins as siblings and Rushford as her second home. She made many friends through the years, including a close circle of friends, “The Fat Club,” who was family.

Pat enjoyed traveling as a child with her parents — after graduation to Europe and back to Ireland with Harold and later with her girls.

Pat was preceded in death by her husband, Harold, in 2001.

She is survived by her daughters Teresa Waters and friend, Matt Dworschak, of Waumandee, Wisconsin, Margaret and Doug Hongerholt of St. Charles, Mary and John Auer of Plymouth and Patty and Adrian Kanten of Blaine; grandchildren Kathryn Hongerholt, Sean Kanten, Erin Hongerholt and Connor Kanten; and special friend, James Guffey, of Albert Lea.

The funeral Mass will be at 11 a.m. Wednesday at St. Theodore Catholic Church in Albert Lea. Rosary will be at 4 p.m. Tuesday with visitation until 8 p.m. at Bonnerup Funeral Service in Albert Lea and one hour before the funeral at the church. Burial will be later at St. Joseph’s Cemetery in Rushford.