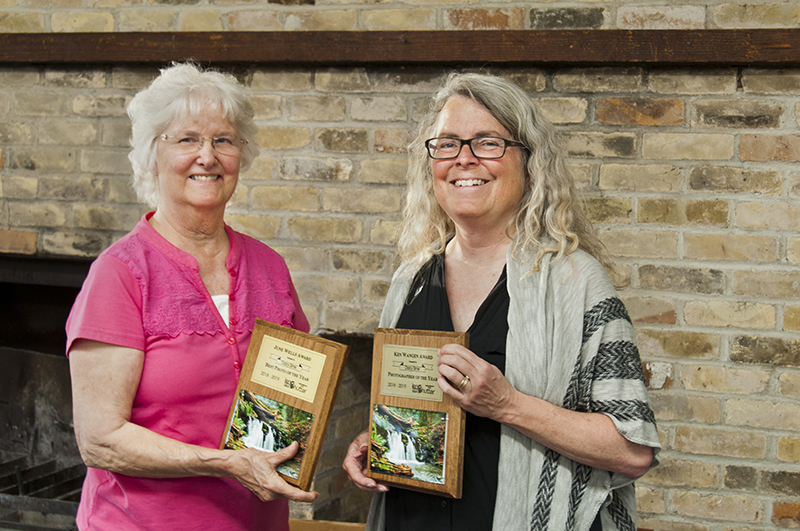 Carol Haroldson presented plaques to Darcy Sime for the Ken Wangen Award for earning the most points during the Lens & Shutter Club year and the June Wells Award for the Best of the Best photograph taken during the club year. Provided

The Lens & Shutter Photography Club had its annual end-of-year awards picnic on May 16 at The Edgewater Park Cottage.

The competition category for May was open. Members receiving awards were Donna Thoreson, first place for “I’m Trying to Keep Warm;” Mitch Pederson, second place for “Redtail Beauty;” and Darcy Sime, third place for “Hummingbird Flight.” Members receiving honorable mentions were Jean Aamodt for “Study of a Bottle,” and Carol Haroldson for “Patriotic Emmy Jo” and “Yellow Beauty.” Merit awards were given to John Eisterhold for “Geese Family,” Pederson for “Great Horned Owl” and Linda Eisterhold for “Milkweed.”

Best of the Rest of 2018-19 year awards were won by Ron Oyer, first place for “One by Itself;” Sime, second place for “Fall Color Water Fall;” and John Eisterhold, third place for “57 Fender.” End-of-the-year judging was performed by Bob and Betty Peoble.

Members Alison Witter and Thoreson were first-time winners of the Century Club Award.

The next meeting of the Lens & Shutter Photography Club will be Sept. 19. The program will be Milky Way Photography by Sime. Competition category will be Flowers. The group meets the third Thursday of the month at Mayo Clinic Health System in Albert Lea room 465 on the lower level September through May.