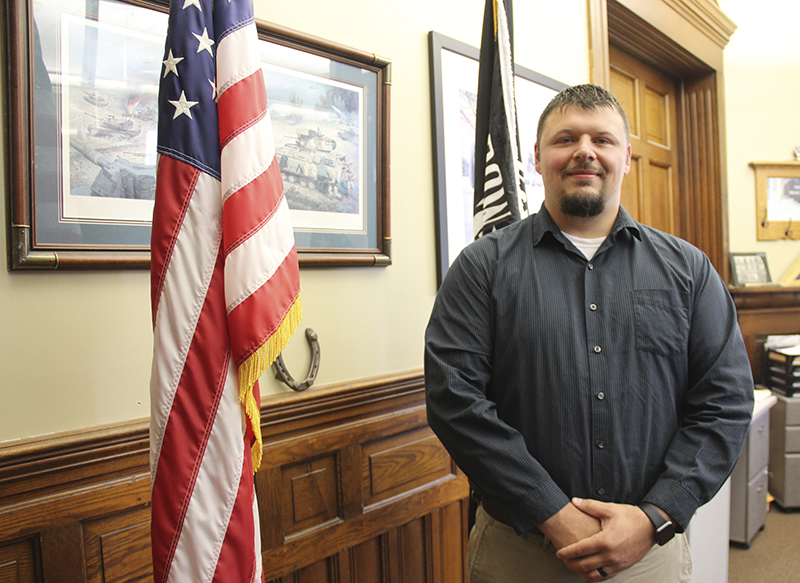 Brandon Servantez will start next week part time as the new veterans services officer for Freeborn County. He will replace Ron Reule, who is retiring. - Sarah Stultz/Albert Lea Tribune

A Freeborn County employee who has worked over the last six years in the probation departments in Waseca and Freeborn counties will transition to a new role later this month as veterans services officer.

A veteran himself, Brandon Servantez, 34, said he served as a military police officer and spent one year in Iraq in 2005 and 2006 before he injured his knee and his military service was cut short.

Servantez received his bachelor’s degree in criminal justice from Concordia St. Paul and started in probation in 2013 with an internship in Freeborn County and completed some temporary work while another employee was on medical leave. He worked in the probation department in Waseca County from 2014 until April 2018, after which he started with Freeborn County.

Aside from his duties as a probation officer handling pre-trial services for the county, he said he has worked with Freeborn County District Court Judge Ross Leuning to implement the Third Judicial District’s veterans court.

“I’ve always had a passion in working with veterans,” he said.

He served on committees for grants and policy writing for the veterans court, which currently has seven veterans in it.

He said when the position opened up, he thought it would be a good segue from his work with the veterans court to helping veterans and giving veterans the benefits due to them.

“I was excited to get the opportunity to fill in his shoes,” Servantez said.

He will be training with Reule before Reule leaves and also recently attended a national training in Cleveland, Ohio, with veterans services officers from other counties and learned about claims, benefits and burial services for veterans.

He said he is looking forward to serving in the position and helping veterans every day. He estimated the county has at least 2,000 veterans.

Servantez, who lived a majority of his life in Freeborn County, recently moved to Kasson, where his wife, Stephanie, was hired as a school nurse.

Aside from work, Servantez said he enjoys fishing, hunting, following Twins baseball and spending time with his family. He and his wife have a 6-year-old child.